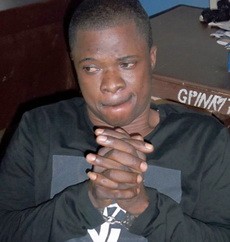 A 34-year-old self-styled police detective is in the firm grips of the Tamale police, after his nocturnal activities were uncovered by managers of TICC Guest House.

The suspect, whose real name was yet to be known, claimed to management of the guest house upon checking in, that he was Kojo Boateng. Upon his arrest, however, he disclosed to the police that his real name was Kojo Opare Richard.

A thorough search conducted in his effects uncovered a voter’s registration identification card with his portrait bearing the name, Joe Richie.

According to the facts of the case, the suspect booked a room at the guest house under the guise a police detective from Accra on official duties in the region. He however, failed to pay his three-week accumulated bill of GH¢360.

Management of the facility had hints that he was planning to vacate their premises for another hotel and confronted him to settle his debts, but he instead gave them his laptop and promised to pay them the money and retrieve the laptop later.

Dissatisfied with this arrangement, owners of the hotel took the laptop to the police station and lodged a complaint with the police about the conduct of their client.

The suspect was immediately arrested, and in his caution statement admitted he was not a cop as claimed.

After interrogation, the police retrieved a pair of handcuffs and an amount of GH¢50 counterfeit notes from his effects. He claimed the handcuffs belonged to his friend who was a police officer, but he could not disclose him.

Police disclosed to Daily Guide that he would be charged for stealing and illegal possession of police accoutrements.