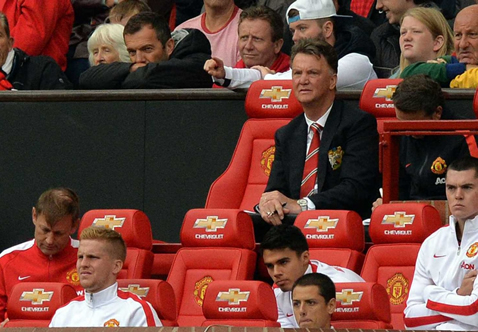 The Red Devils are facing a threat from their own fans who have become extremely angry at the Glazer family’s lack of investment in the rebuilding the squad.

After the appointment of new boss Louis van Gaal supporters were expecting an influx of players this summer, especially after executive chairman Ed Woodward claimed they are willing to break the bank for star names.

However with only 10 days left in the transfer market, United’s only main signings have been £28million midfielder Ander Herrera from Athletic Bilbao and £30million Southampton left-back Luke Shaw.

The supporters are therefore furious that heading into the new campaign, United have still yet to resolve their transfers when they were led to believe that most of the key targets would have been brought to the club before the season kicked off last weekend.

And after another dismal performance in the Premier League – losing 2-1 to Swansea at Old Trafford – social media has been swarmed by #GlazerOut messages.

“United supporters worldwide have hit out in huge numbers against the Glazer family’s ownership of Manchester United via Twitter and Facebook,” said Sean Bones, member of the Man United Supporters’ Trust.

“It’s obviously something that will be a huge concern to the current sponsors who have invested a lot of money in Manchester United as a brand.

“There will be a lot of attention to see how the New York Stock Exchange views the negative reaction by supporters in terms of the Glazers’ handling of United.”

Man United are currently linked with moves for Argentine duo Marcos Rojo and Angel Di Maria, who they are hoping to sign before September 1st.