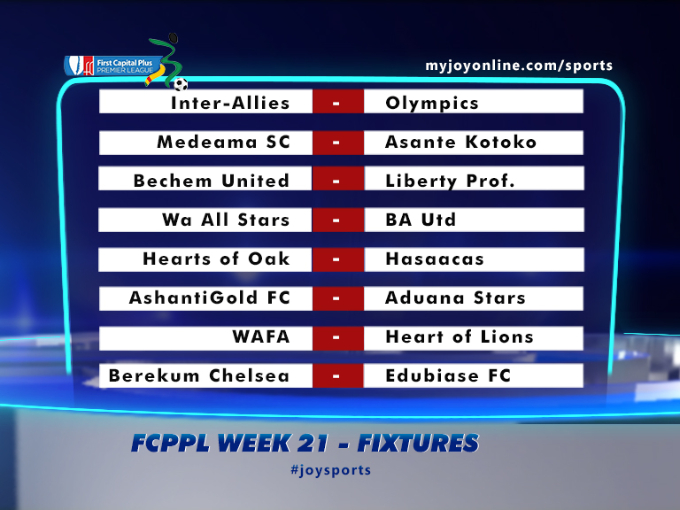 Due to the live broadcast of Joy FM's annual Bridal Fair, the #JoySports team will not air commentary of the league games this weekend. But there'll be live updates on our Facebook and Twitter.

Matchday 21 of the First Capital Plus Premier League will see exciting matches played in across eight league centres this weekend.
Following the dramatic shake up at the top of the table last week, many teams will be hoping to consolidate or better still improve on their standings on the table.

This is perhaps the biggest game of the weekend which will see the league leaders meet the second placed team. Last weekend saw Aduana Stars get a significant boost in their bid to claim the 2014/2015 title.

The Dormaa side's 1-0 triumph over WAFA saw them move an impressive 4 positions upwards from 6th to 2nd in the league. In the corresponding fixture, Aduana were victors and AshGold will be playing to get revenge and assure their fans that they are headed for the title following their shocking 2-0 defeat to Hasaacas.

Medeama are unbeaten at home, having won 7 games and drawn 3. And with Nathaniel Asamoah, a former Kotoko striker, currently playing for Medeama being the league’s leading scorer with 13, it sets the tone for a good game.

This encounter will see the 7th and 8th place teams play against each other. Both teams are tied on the same points and all want to move ahead. Interestingly both teams come into the game on the back of losses.

Last weekend Medeama lost to Edubiase while Kotoko lost to arch rivals Hearts of Oak on penalties granting Hearts the President's Cup on Wednesday July 1. Despite the loss to Hearts, Kotoko’s goalie Eric Antwi believes the team are playing well and is optimistic about the team’s chances.

In an interview he said “Sometimes you don’t have to look at the results but the performance is really up there. We have improved in performance and I am sure that after that the rest will follow.”

The Tarkwa based side have won just one home game against the league champions in 7 meetings (L5, D1). Also, Medeama are yet to beat Kotoko in a league game since the club changed its name from Kessben fc in the second half of the 2010/11 season (L7, D2).

Unlike the Medeama-Kotoko encounter, both Allies and Olympics come into their game following wins last weekend. Allies stunned the then second placed team Wa All Stars in Tema while Olympics inflicted the same 1-0 goal defeat on Liberty Professionals.

Both teams will want to reassure their fans that these big wins are not one offs but something they should expect a lot more. Ahead of the game, Technical Director of Allies; Willie Klutse has said in an interview that

“ We [Allies] got a good victory against Wa All Stars and I think we have to build from there…there have been talks of finishing in the top four but for us the aim is still to ensure survival, the rest is bonus.”

This game is a lot more crucial for the Wonder boys despite their wins against Liberty Professionals. They still languish fifteenth on the sixteen table.

This encounter at the Wa Park has a lot on the table to offer especially for the home team. They were stunned by Inter Allies last week and will be hoping to pick themselves back up. The statistics however go in their favour nonetheless looking at the Sunyani side’s abysmal away record.

They have neither won nor drawn any game away and the boys from the Upper West will be hoping it stays this way. B.A United will however be bolstered by their 1-1 draw to a strong Hearts of Oak side last weekend. 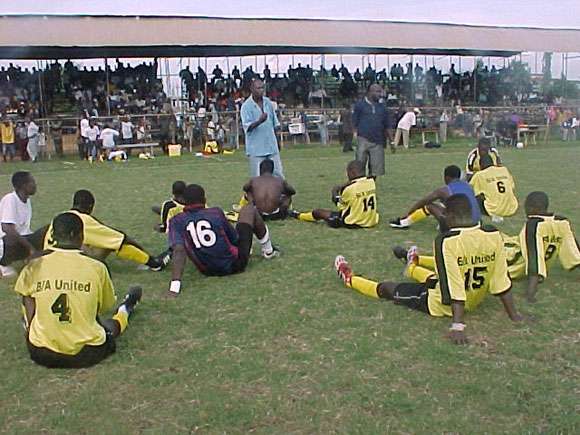 WAFA will want to improve on that goalless draw against Lions in the first round when they play host to the Kpando boys. It will be crucial for WAFA to redeem themselves in front of their home crowd after their 1-0 loss to Aduana last weekend.

Lions will also want to prove that the 1,000 cedi fine and one home match ban imposed on them by the Ghana Football Association will not distract them from their aim of doing well in this season. The Kpando side are flirting with relegation currently and a loss can further dent their Premier League survival.

Both teams come into the game in confident mood. Hearts tasted victory on Wednesday in the President's Cup against Kototo while Hasaacas stunned league leaders AshGold with a 2-0 win last weekend in Sekondi.

Both the Phobians and the Giants of the West will want to make winning games something their fans and management will become familiar with. In a recent interview, Coach Herbert Addo has said that he is building the team and that:

“We [Hearts] are just encouraging them but unfortunately things are not going the way we expected, but to me, I will say better late than never. This is because I am grooming the players…these groups of players are for the future.”

The last time both teams met in Dansoman, Liberty emerged winners in a tough 3-2 thriller. Bechem will want revenge for that loss whereas Liberty will want to restore confidence following the 1-0 defeat to Olympics last week.

The defeat saw Liberty pushed further down to 6th from 4th.

This will be Chelsea's 201st game in Premier Leagie history and they'll want to overturn the 2-1 defeat they suffered at the hands of Edubiase the last time the pair met. Chelsea was the only top 5 team not to have lost last weekend following their 1-1 draw with Lions.

Edubiase come into the match on the backdrop of an impressive 1-0 win over Medeama last Saturday and will want to move away from the relegation spots with yet another win.