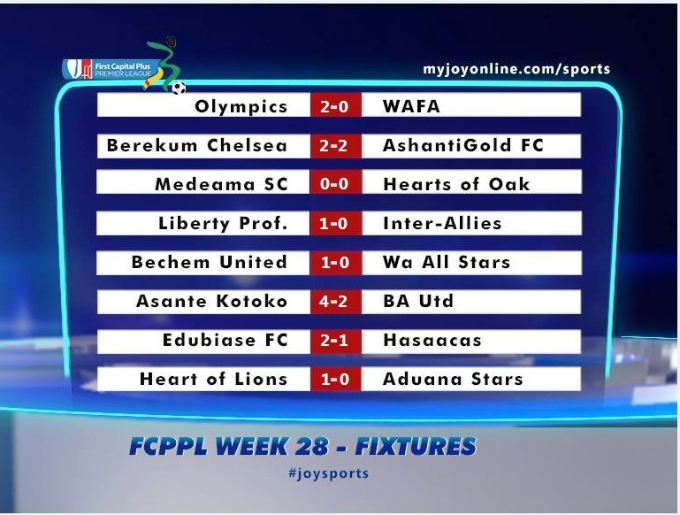 Matchday 28 brought Hearts into the drop zone, Kotoko needed a big rally and there was generally drama at the centers.

Kotoko produced a late renaissance to defeat relegated B.A. United in a dramatic encounter at the Baba Yara Stadium.

Amos Frimpong shot Kotoko into the lead in the 22nd minute and Obed Owusu doubled it in the 31st minute to leave the score 3:0 at the break.

BA United, however, produced a remarkable pul back all two goals. First, Karim Jabia pulled one back in the 63rd minute before Abdul Wahab equalized in the 75th minute to set up a tense ending.

With eight minutes to go, Richard Mpong hit a late brace to hand Kotoko victory. He scored to give Kotoko the lead in the 82nd minute before sealing the victory five minutes from time.

The defending League Champions have now moved to 3rd on the league table while BA United remain bottom on the table.

Accra Hearts of Oak have dropped back to the relegation zone after a 0-0 draw with medeama in Tarkwa.

Hearts of Oak’s draw, coupled with other results not favouring them means the Phobians have slipped down after their recent improved results. Bechem United, Heart of Lions.

Great Olympics and New Edubiase all picked up crucial wins at home.

Hearts are now 15th on the league table, a point behind Bechem United, Heart of Lions and Great Olympics, who are 14th 13th and 12th respectively.

AshGold snatched a vital draw in their push for the 2014/15 FCPPL title away at Berekum Chelsea on Saturday.

The league leaders drew first blood as early as the 8th minute of the match day 28 opening fixture via a penalty converted by striker Yakubu Mohammed. It was his eleventh goal of the campaign.

But diminutive forward Kofi Owusu equalized for Chelsea with a nice header from Justice Anane’s cross on 35 minutes. Chelsea gathered momentum and probed the AshGold defence but were denied by goalkeeper Robert Dabuo who pulled three good saves towards half time.

Latif Salifu came on as a second half substitute and his impact was rightly felt. In the 66th minute, the experienced forward found himself at the right place and capitalized on a mis-communication between Joshua Tijani and goalkeeper Robert Dabuo to give Chelsea a 2-1 lead.

Coach Bashir Hayford, going for the broke threw in more forwards with Didier Kore and Bashiru Osman but it was Emmanuel Osei who will emerge the hero for his side. The striker skilfully weaved past the Chelsea backline only to be hacked down in the penalty area by defender Nicholas Opoku.

A clear penalty offence and referee Desmond Abbey wasted no time in pointing to the penalty spot after his whistle. Osei elected himself and planted the ball in the net – the goal which ensured the Miners will go home with a point from the Golden City Park.

Striker Kofi Owusu who scored Chelsea’s first goal and took his tally to 15, was voted man-of-the-match and was also presented the award for the FCPPL’s Player of the month for July.

Title contenders, Aduana Stars have lost further grounds on leaders Ashantigold after going down 1-0 to Heart of Lions in Kpando.

Prince Acquah converted an 18th minute penalty to give Lions all the valuable three points, which also kept their dreams of avoiding relegation alive.

With Ashantigold stretching their lead on Saturday after earning a vital point away at Berekum Chelsea, Aduana needed to win to keep up the pressure on the miners.

However, their defeat has now left them four points behind and Ashantigold will be crowned champions if theu win their next game at home.

The match was equally important for the home side, who are also involved in the battle to avoid relegation. With so many clubs in contention to avoid the drop, defeat would have spelt doom for Lions, especially on a day their other relegation contenders recorded vital points.

Great Olympics’ bid to avoid relegation was boosted after Godwin Attram scored twice to hand them a massive 2-0 victory against WAFA at the Accra Stadium.

Attram gave Olympics the lead in the 50th minute and scored the second in the 78th minute; three minutes after missing a penalty.

The win has lifted Olympics up to 12th on the league table, a point and a place above their city rivals Accra Hearts of Oak, who were held by Medeama.

The wonder club next face relegation rivals, Heart of Lions at Kpando in a crucial encounter before welcoming Ashantigold in Accra in their final match of the season.

NB:Prince Acquah of Heart of Lions is credited with the league's 460th Goal with his penalty goal against Aduana Stars.ss