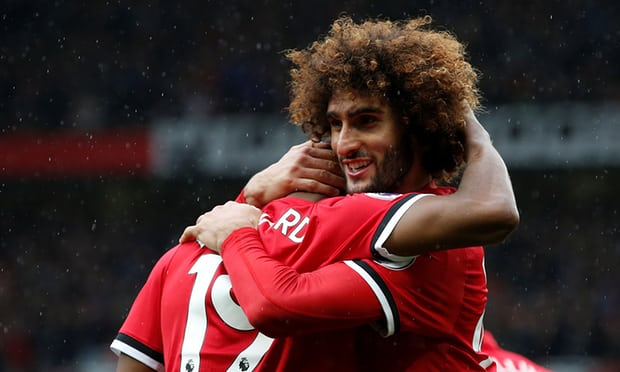 Manchester United took over at the top of the table – for now at least – and extended bottom side Crystal Palace's miserable start to the season with a routine 4-0 victory at Old Trafford.

Juan Mata's third-minute strike, plus two goals from Marouane Fellaini and Romelu Lukaku's late tap-in, ensured the Eagles have now lost their first seven league matches of the season without scoring. Including their defeat on the final day of last season, that's 720 minutes without a top-flight goal.

Harry Kane is having no such problems. He took his total to 13 goals in eight matches in September as Spurs thrashed Huddersfield 4-0, making it the most prolific month of the England striker's career. That tally matches the best efforts of Barcelona's Lionel Messi (13 in March 2012) and Real Madrid's Cristiano Ronaldo (13 in October 2010).

Peter Crouch scored a late winner for Stoke against Southampton, for whom Virgil van Dijk conceded a penalty on his first start of the season. That spot-kick was missed by Saido Berahino – taking his run of games without a goal to 30 – but the Potters still managed to run out 2-1 victors.

Watford snatched a point at West Brom, Richarlison's injury-time strike securing a 2-2 draw for the Hornets and extending their unbeaten away record.

West Ham are out of the bottom three after Diafra Sakho's last-gasp winner earned them a 1-0 victory against Swansea, while the game between Bournemouth and Leicester, two of the bottom four at the start of play, ended goalless.