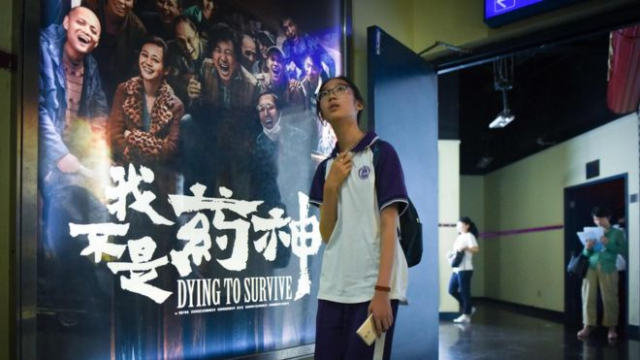 Mr Li spoke after Dying To Survive stormed the box office, taking in $390m (£296m) in its first two weeks.

It tells the fictional story of a shopkeeper who imports cheap, Indian drugs banned in China for profit.

Cancer is China's number one killer, with nearly three million people dying of the disease each year.

Although China has universal health insurance, medical facilities and the standard of treatment are distributed unevenly. Urban areas are generally better served than the countryside, and everyone usually has to pay something towards their care.

That is probably why this film has struck a chord with the public.

Even before its release, the Chinese government recognised it had to improve the accessibility and price of medicine. In May, it got rid of tariffs on all imported cancer drugs.

But the film seems to have prompted Premier Li to repeat the promise to improve treatment for the more than four million Chinese people who are diagnosed with cancer each year.

The episode also reveals something else about China: It is a one-party state in which citizens have few avenues to express their opinions and influence decision-making. But even here, leaders cannot afford not to listen to what their people are saying.

Why is the film such a hit?

It is inspired by the true story of Chinese businessman Lu Yong who was arrested five years ago for importing a generic cancer drug.

The case against him was dismissed after public debate of the issue, AFP news agency notes.

Xu Zheng, a popular comedy actor and director, plays Mr Lu, a smuggler who develops compassion for the patients who buy his drugs.

The villain of the dark comedy is the pharmaceutical industry.

"It is real life," one Beijing cinema-goer, Dr Zhang, was quoted as saying by the Wall Street Journal. "I know patients who had leukaemia [and] ended up losing both lives and money."

The low-budget film touches a "social wound" about not being able to get hospital treatment, said Gao Wei, an industry expert at the China Centre for Globalization.

"As a film that criticizes what is actually happening, it could only become popular because it got the level of criticism right to pass China's censors," Reuters quoted him as saying.

The film's appeal can be measured by comparing it with big-budget fantasy epic Asura which made just $7.5m when it opened this past weekend.

Writing on the popular WeChat account of the magazine Vista Story, film critic Yang Eryu said of Dying To Survive: "This little step might actually be a big step for domestically-made films."