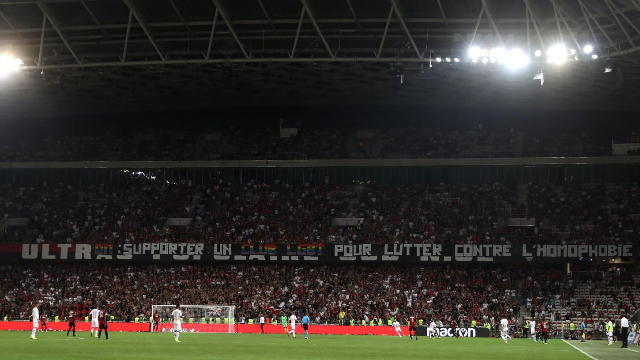 A Ligue 1 derby between Nice and Olympique Marseille was interrupted for several minutes on Wednesday over the display of banners with homophobic connotations.

Play was stopped in the first half and players left the field over the banners displayed by Nice fans. French media also reported homophobic chanting by the home supporters.

A second-half Dimitri Payet penalty gave Marseille a 2-1 win, their first of the season and first under new coach Andre Villas-Boas.

Dario Benedetto opened the scoring in the 31st minute, his first goal since joining from Boca Juniors and his team’s first of the season before Wylan Cyprien levelled with a 66th-minute penalty.

Earlier this month, a Ligue 2 match between Nancy and Le Mans was halted because of homophobic chants.

The French league told referees before the season to stop games in such cases and has pondered introducing a list of banned words in stadiums.

In March, French football league president Nathalie Boy de la Tour came under fire after saying that homophobic chants were part of the culture of the sport.

“It’s part of the folklore,” she said.

DISCLAIMER: The Views, Comments, Opinions, Contributions and Statements made by Readers and Contributors on this platform do not necessarily represent the views or policy of Multimedia Group Limited.
Tags:
French Ligue 1