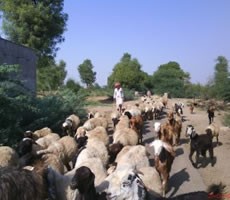 District Chief Executive (DCE) of Fanteakwa district in the Eastern Region has called for heightened measures to deal with nomadic Fulani herdsmen in the country.

According to Abass Fuseini Sbaabe, the nefarious activities of the nomads makes them more dangerous and destructive than the notorious militant Islamist group Boko Haram who have killed dozens and destroyed properties in Nigeria and other African countries.

“These Fulani herdsmen in the country are also not different from deadly Boko Haram militant group in the West African sub-region,” Abass Sbaabe stressed.

He spoke Wednesday on ‘Burning Issues’ on Adom FM, hosted by Afia Pokua.

Farmers and residents in parts of the Eastern and Ashanti regions say they are currently living in fear due to the activities of the Fulani cattle herders.

The nomads have raped, killed and maimed residents who have confronted them over the destruction of farms due to grazing by their herd.

A 25-year-old farmer, David Atea, was shot dead in his farm recently by Fulani herdsmen in Agogo in the Ashanti Akyem North District of the Ashanti Region.

When security men stormed the Agogo district in a bid to flush out the nomads, reports suggest they trooped to Abass Sbaabe’s Fanteakwa district though unapproved routes.

However, Abass Sbaabe said the menace of the Fulani herdsmen is not only in Ghana but cuts across other African countries. He says Ghana’s security agencies need strategise to deal with them.

“We cannot entertain Fulani herdsmen and their cattle in my district anymore because they’re not law abiding” the DCE lamented.

Sbaabe said the assembly and the security agencies are doing their best to evacuate the Fulani herdsmen, adding that the assembly will ensure that peace reign in the area.

So far, 27 people have reportedly been killed in the past three years by the nomadic herdsmen.

Currently, the Ashanti Regional Security Council (REGSEC) has deployed a combined police and security task force into the Asante Akyem town of Agogo to beef up security in the area.

The deployment of the heavily armed security men follows the building of tension in the area arising from the destruction of lives and property in the area by the Fulani herdsmen.

The Ashanti Regional Minister, Peter Anarfi Mensah who disclosed this at a press conference in Kumasi to address the Agogo Fulani menace also said the deployment of the security men is to help forestall any clashes between the natives and the Fulani herdsmen.

The move, he added forms part of the immediate plan taken to contain the nomadic Fulani herdsmen.