Ghana has progressed but people have retrogressed - Rawlings booms - MyJoyOnline.com

Ghana has progressed but people have retrogressed – Rawlings booms 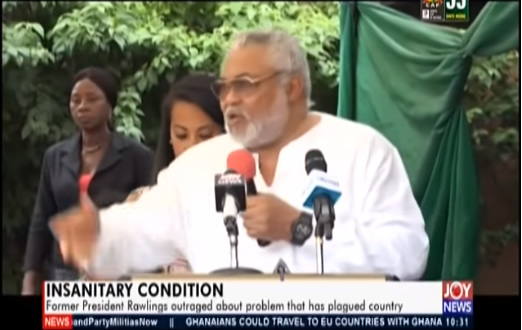 Former President Jerry John Rawlings has gone ballistic over the “uncivilised behaviour” of citizens which he says, is responsible for the eyesores of filth constantly dotted over cities.

In his characteristic explosive speech where he mixes English and Ga, the former President choked as he struggled to comprehend the level of indiscipline in the country.

Open defecation persists in Ghana and despite the creation of a Sanitation Ministry, it is widely believed Ghana’s sanitation situation has not improved.

“This is retrogressive!” Jerry Rawlings screamed at a sensitisation ceremony ahead of the construction of a mother and child center in Maamobi, a community in Accra.

The former President said he had expected that with improvement in social infrastructure as a measure of development, there will be a corresponding improvement in public behaviour.

But he has been disappointed. There has been a worsening public behaviour, he observed.

“Look at our roads and infrastructure…the universities,” he pointed to improvement in Ghana’s infrastructure since he left the scene as President in 2001.

He said while Ghanaians did not experience the volume of development in the past, they conducted themselves “in a very responsible and disciplined manner.”

“It was a better reflection of the quality of the human being,” a quality he found to be dying among the current generation of Ghanaians.

Rawlings complained of how Ghanaians are losing their lives in preventable deaths because medical professionals are growing lackadaisical.

He charged good nurses, doctors and medical professionals to bring their influence to bear on the bad nuts otherwise, they will destroy the good names within the profession.