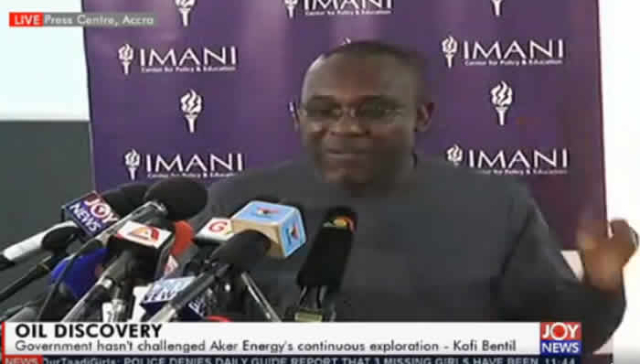 Unless the government acts quickly to protect the interest of the state, Ghana may lose a $30 billion oil find to a Norwegian company, Aker Energy, IMANI Ghana has said.

The estimated 450 million to 550 million barrels of oil – found in two wells – was discovered in February and March 2019.

Early in the year, the company announced the discovery of oil in the Pecan South-1A well in the Deepwater Tano Cape Three Points (DWT/CTP) block offshore Ghana.

The find is touted as the biggest oil find in Africa.

At a forum organized by civil society group, IMANI-Ghana, its Vice-President Kofi Bentil argued forcefully that the find is being claimed by Aker Energy without a legal basis.

Aker Energy acquired the 51% stake in an earlier well in the area found by another Norwegian company Hess Oil.

Hess Oil operated under a Petroleum Agreement with the government of Ghana signed in 2006 which granted the company seven years within which to undertake oil exploration in a given area, the Contract Area.

This Exploration Period ended in 2013.

Kofi Bentil argues by the laws governing oil exploration and production in Ghana, any oil find made outside of the exploration period cannot be claimed by the company that found it – it belongs to the state.

In fact, he said, Aker Energy, having inherited the well from Hess oil at a time the exploration period had ended, was not permitted by law to continue any exploratory activities.

They were only required to do appraisal work on the Pecan find made by its predecessor company – Hess Oil.

Why were they permitted to engage in exploration in flagrant violation of the laws? Kofi Bentil wondered.

Assuming that Aker Energy accidentally stumbled on a new well in the course of the appraisal, it was legally obligated to announce this to the government for a negotiation on who controls what stake.

Kofi Bentil said that has not happened in this case.

Instead, he said, the company has claimed the new wells as though they formed part of the stake acquired from Hess Oil.

Kofi Bentil read copiously, documents suggesting that Aker Energy has submitted to the government its Plan Development in respect of the new wells.

By law, the Minister of Energy is expected to assess that Plan of Development (PoD) and either disagree or endorse it.

Where the minister fails to respond in 30 days, the proposals submitted by the company are deemed as accepted.

The IMANI Vice-President said by Friday, April 26, 2019, if the Energy Minister John Peter Amewu fails to respond – the Petroleum Commission has advised him to – the $30 billion oil find would become the sole property of Aker Energy.

He does not understand why the ministry appears to be lax while the country stands on the cusp of losing a resource that rightfully belongs to the people of Ghana.

The two new oil wells are not the only resources Aker Energy is claiming ownership of.

According to Mr Bentil, in clear violation of the laws, the company has refused to relinquish the rest of the contract area back to the state.

In fact, the company has claimed the 30% relinquished by Hess before its stake was acquired by Aker Energy.

The company has actually indicated it will continue to explore for oil in the Deepwater Cape Three Point/Tano South area.

This is in spite of the fact that there is no petroleum agreement permitting it to continue conducting any exploration.

Kofi Bentil insists that having made a find and having conducted appraisal of the wells, the remaining parts of the Pecan field should have been relinquished.

IMANI is concerned that Aker Energy may be disregarding Ghana’s laws because it is politically connected.

One of the original partners of its predecessor company, Fueltrade Ghana Ltd., is owned by the Chief Executive of Ghana National Petroleum Corporation (GNPC), he said.

Kofi Bentil said if this interest still obtains, the position of Dr K.K. Sarpong as head of GNPC which is the government’s chief negotiator on oil matters, raises questions.

While maintaining that IMANI is not interested in making allegations and accusing people of wrongdoing, he insisted the government must protect the national interest by claiming its share of the newly discovered oil wells.

He is surprised that government did not pay the $140 million it was required to pay to retain a stake in the Pecan well.

“Ghana needs the money,” he said, “God knows we need it so government must act quickly and claim it.”