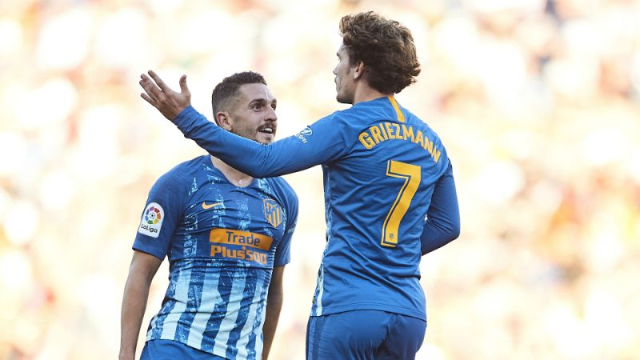 A stunning free kick goal from Antoine Griezmann earned Atletico Madrid a 1-1 draw against Sevilla in an entertaining game between La Liga's second and third-placed sides on Sunday which weakened both sides' pursuit of leaders Barcelona.

Sevilla took a deserved lead at a packed and rocking Sanchez Pizjuan stadium in the 37th minute with a close-range strike from Wissam Ben Yedder following a clever team move, shortly after striker Andre Silva had also smacked the post for them.

Ben Yedder missed a clear chance to double Sevilla's advantage but was thwarted by Atletico goalkeeper Jan Oblak, before Atletico pulled themselves level right at the end of the first half through Griezmann's sizzling set-piece.

The draw left Atletico second in the standings on 35 points with Sevilla third on 33, while Barcelona, on 37 points and in action against Getafe later on Sunday, were handed the chance to move five points clear at the top.

In a calmer second half, Atletico, who created few chances throughout the game, managed to plug the holes that Sevilla, through veteran winger Jesus Navas in particular, had been exploiting.

Ben Yedder missed another chance for the home side, failing to find the target when clean through while team mate Quincy Promes saw an arrowed effort tipped away by Oblak.