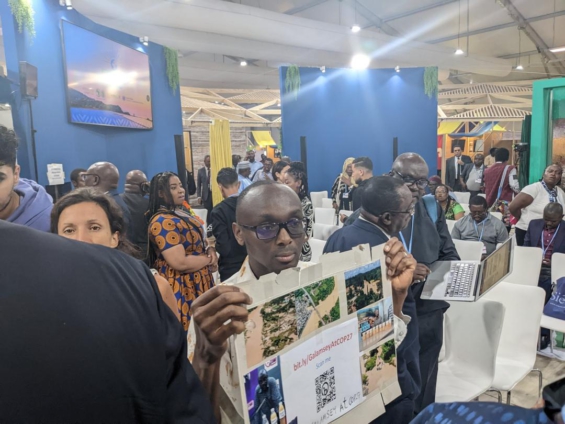 Founder of the Ghana Youth Environmental Movement, Gideon Commey, has staged a one-man protest at the ongoing COP27 in Egypt.

In a video posted on the Movement’s Twitter page, Gideon is seen holding a placard calling on Ghanaian officials present to address the galamsey canker in the country.

Gideon Commey said his attempts to get the Agricultural Minister, Akoto Afriyie to address the galamsey menace proved futile as the Minister brushed him off.

“I was at COP27 today. I staged a one-man direct action targeting Ghana officials at the summit. I didn’t see Abu Jinapor but I targeted the Agric Minister and told him that his government should address galamsey else there’s no point they being at COP.

“He told me he was having an important discussion (with the man he’s talking to) so I should keep quiet. I told him my galamsey campaign was equally important,” he said.

Galamsey has devastated many mining communities in the country.

In areas, like Amansie, a land likened to the size of a town has completely been destroyed by illegal mining activities.

Several rivers have been severely polluted with mud and mercury residue from mining activities. Some communities have mines dug under homes leading to buildings collapsing on residents.

Attempts by government to halt the activities of the illegal miners have not been successful as miners continue with their illegal activities on the blind side of government.

DISCLAIMER: The Views, Comments, Opinions, Contributions and Statements made by Readers and Contributors on this platform do not necessarily represent the views or policy of Multimedia Group Limited.
Tags:
COP27
Gideon Commey