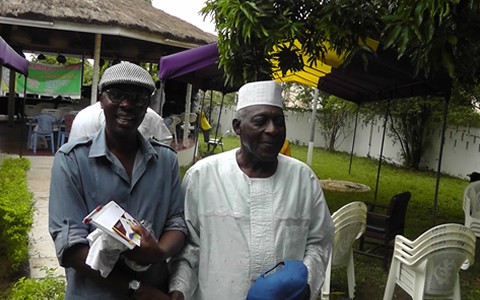 I wrote this sometime in May 2012. Originally titled “Professor Kofi Awoonor’s sound bytes”, I sent him a copy and he responded by saying that I had made his day. The reason would be found at the very end of this lifetime eulogy now turned into a dirge. I met him after that and he autographed one of his books to me with these words: “For Harruna Attah, who like the ancient courier brought a near perfect account back to the village from the battlefield.” That was in June 2012.I have retitled the piece as…

Was it Chairman Mao who said “No investigation, no right to speak”? Poor Mao, so many quotes have been attributed to him and other men and women of history that it is difficult to check out the authenticity of such quotes.
When in doubt, just come up with some wise sounding word or two and attribute it to any one of them! But whatever it is, the quotation above makes so much sense and I do not think, it would disturb the great Chinese leader’s eternal nap…

Last Saturday, I attended the congress of the Ghana Association of Writers (GAW) where the keynoter was Professor Kofi Awoonor, Chairman of our Council of State. In fairness to my own conscience, it was not with an open mind that I approached this keynoter. It was my first close encounter with the man and from years of hearing so many negative things about him, I expected nothing but pugnacity with a dash here and there of ethnocentricity!
And when the time came for him to deliver his address, I had worked myself into an indignant posture ready for what I expected would be “fireworks” – all based on my own prejudices.

He went to the lectern, initially even seeming unsure of himself. His speech was on the theme of the African Writer and the Future of the Continent. I expected tomes of closely typed texts, but there he was, without any prepared speech, but a scrap or two of small note papers, which he even hardly looked at during the 30 minutes delivery. It was captivating! No voice raising, no thumping of lectern, no histrionics! I was mesmerized by the sheer intellectual force of his presentation which was so full of humour…

I found myself jotting furiously away not wanting to miss anything. He flowed in and out of ideas, spun philosophical yarns into very intellectually accessible fabrics which I found extremely fascinating.

He began by laying his idea about who/what is a writer: “A writer is first and foremost an individual; born and bred. Comes from somewhere, a family, a town, a country, a culture, a civilization, a people… Individuality defines artistic capabilities. No one comes from a vacuum…”

The above, he said, provides the writer the layers of consciousness needed to formulate his writing. The spirit that moves the writer should be born out of the social, religious, psychic existence of that writer.

As a believer in God, he did not also believe that God is in any church or any mosque alone but everywhere. Worship, therefore should be possible seated, standing or lying down, for God is the spirit force of the creative process: “Poets, singers, artists, dancers are manifest or articulators of the word of God.”

Society, he said “is the teacher, the mentor: listen, watch, observe the life around you; it is that which will provide you the impetus.” A writer, Professor Awooner said, “tells the truth – honesty wakes the world up…As a writer, know yourself.”

On the African part of his theme, he said: “The African condition has become the proverbial story of despair, confusion, etc., but ironically the African writer is part and parcel of this failure.” There was therefore the need for the reaffirmation of the Black Awareness and Humanity: “In essence, African writers, out of the individuating circumstances of history, need to construct the story – our own personal stories.”

Before Pythagoras, were there not pyramids in Egypt? With a slight sense of benign mischief, Professor Awoonor brought up the image we now all associate with Jesus Christ. Pointing to Professor Akiglakpa-Sawyerr who was seated at the high table, he said Jesus Christ, who was born somewhere in the Middle East and had skin colour not too different from Professor Akiglakpa-Sawyerr’s had over the millennia been transformed into a blond, blue-eyed Caucasian!

A process he described as “Historical Bleaching”! He dissected his theme, like any good teacher would, without any hint of bigotry or hubris and when he ended we gave him a standing ovation.

Later I sidled up to him to find out if he had a “full text” somewhere of his presentation. “No, Harruna”, he responded politely, “I like to say these things directly from my head…” and when I asked to take a photograph with him, he promptly agreed. That opened the floodgates as others also rushed to have photographs taken with him.

My conclusion: Professor Kofi Awoonor had made my day!