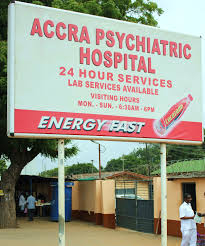 Saddled by debts, the Accra Psychiatric Hospital is closed to new patients, a situation that will persist until government’s promise to help has been fulfilled.

The hospital says it will remain closed to new patients until some GH¢1.6 million promised by the Ministry of Health hits the account of the hospital.

Public Relations Officer of the Ministry of Health, Tony Goodman, said government should provide the financial assistance by the close of day Tuesday.

Director of the hospital Dr. Pinama Appau says the drastic decision not to take in new patients has been necessitated by the ballooning debts to food and other suppliers, which currently stands at over GH¢4.2 million.

The debt situation at the psychiatric hospital has also meant reduced rations of food to patients, causing them to become aggressive.

A senior nurse at the hospital, Emmanuel Nyumo, told Joy News working at the hospital has become dangerous due to the occasional aggression of the patients.

“We don’t have gloves, we don’t have the basic things that we need to work with it is really affecting work here,” he said.

Besides the hospital’s debt problem, the facility is battling ageing and crumbling infrastructure.

Roofs with gaping holes, broken down toilet facilities, poorly equipped consulting rooms are a common feature at the hospital.