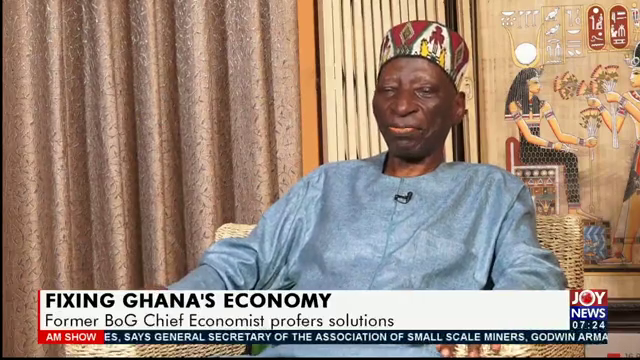 Former Chief Economist of the Bank of Ghana, Dr A. O. Abudu

The former Chief Economist of the Bank of Ghana, Dr Assibi O. Abudu, has likened the supreme laws governing the country’s affairs to autocratic governance.

Speaking in an interview on JoyNews’ AM Show Monday, the reputable economist explained that the 1992 Constitution has not evenly distributed the governance powers to the three arms of government to ensure they are sufficiently independent.

He noted that the constitution has given so much power to the Executive arm that, the Head of State becomes more of a dictator than a democratic leader.

“I don’t know where the 1992 constitution got its inspiration from but it doesn’t obey the laws of democracy. This is because democracy says we should have three separate wings, all of them, independent of each other with equal weight.

“But the 1992 constitution which I consider a coup d’état [does not do that]. Because if the President appoints the Chief Justice, all the judges and 50 per cent of our Ministers must be MPs which means we are mixing the Legislature with the Executive. That is not right; they are supposed to be independent,” he told host Benjamin Akakpo.

He argued that the high dependency of the Legislature and Judiciary on the Executive makes it difficult for the two to hold the Head of State and his appointees accountable.

“So when the President appoints everybody so to speak, what do you call that? You call that dictatorship,” he said.

The Political Scientist also suggested that the 1992 constitution must be changed every 25 years.

According to him, the country’s population doubles every 25 years, as such, it will be unrealistic to rule future generations with the laws of today.

“My feeling is that the constitution, whenever we get a new one, should include a provision that every 25 years we have a new constitution because, in democracy, you cannot tie future Ghanaians to obey what Ghanaians of today will do.”