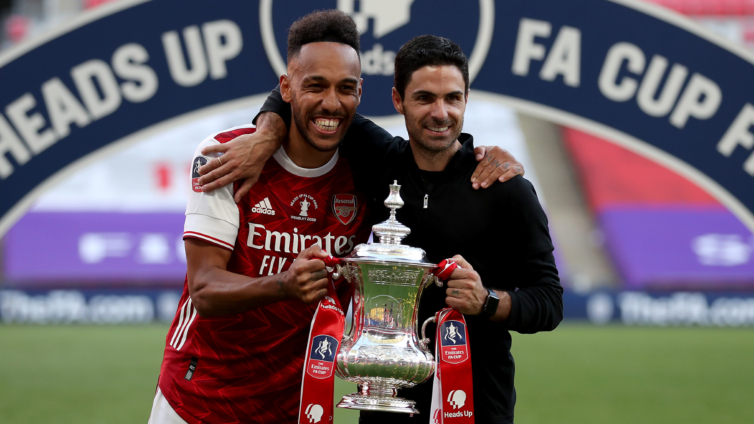 Arsenal striker Pierre-Emerick Aubameyang admitted that he contemplated leaving the club, but the thought of working with manager Mikel Arteta made him stay.

The 31-year-old Gabonese international signed a new three-year contract after he had appeared poised to leave the club in the summer.

However he ultimately decided to stay, and in the process turned down an approach from Barcelona and interest from Inter Milan.

Since Arteta’s arrival, Aubameyang has won the Community Shield and before that the FA Cup, and scored in both games.

Speaking to Sky Sports, Aubameyang explained that it was the manager who was crucial to his decision to stay.

“Two things persuaded me to stay,” he began.

“The first thing was Mikel Arteta because since he came in, he brings a lot of positivity and a new philosophy for us.”

“I think that was important because it matched my game and I feel that I can improve with him. I think this was the key factor and as well, the love that I receive from the fans and the whole club.

“Everyone is treating me very, very good, so I feel at home and that’s why I’m staying.

“We had a chat during lockdown and we were supposed to talk about a game and he said ‘okay, forget about it, we’re going to talk about the future’ and he asked me what I wanted to do.

“I was like ‘I feel good since you came, I’m improving, and the philosophy is very, very nice so I just want to stay’ and he was like ‘I’m sure if you stay you can leave a legacy, but it’s all about you and what you want. Of course you can leave and go for trophies in big clubs as well but I think you can create a legacy here in this great club.’

“This was the key message to me and after that conversation, I was like ‘okay, it’s all clear for me and I just want to stay’ and that’s it.”

Aubameyang acknowledged that he was tempted by offers from abroad to make a move, but the relationship he has with the fans was another factor in his decision to stay in London.

“But this feeling to be here – the love from the fans and all the club – I’m not sure that by leaving I will receive the same love, so that’s why I’m staying.

“I’m really proud to be the captain but it’s not the biggest factor to stay. Of course, it’s a great job to do but it was not a part of me staying here.”

DISCLAIMER: The Views, Comments, Opinions, Contributions and Statements made by Readers and Contributors on this platform do not necessarily represent the views or policy of Multimedia Group Limited.
Tags:
Arsenal
Mikel Arteta
Pierre-Emerick Aubameyang
Premier League