I feel sad for Dr Bawumia, NPP will use and dump him – Mahama 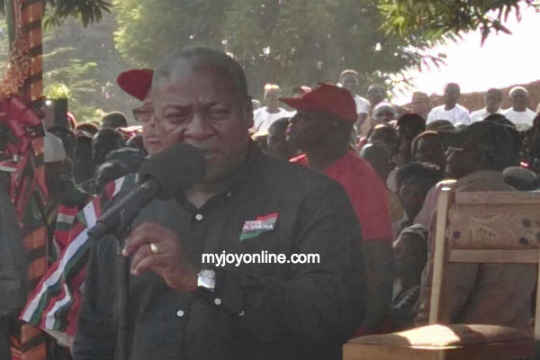 President John Dramani Mahama says there is no way he would have come closer to the presidency if he were a member of the New Patriotic Party (NPP).

He said had he contested in the NPP, the party would have held a congress to elect a flagbearer where several people would have contested against him and ensured that he is defeated.

Speaking at Jirapa as part of his campaign tour of the Upper West Region, the President said, ‘‘Vice president Aliu Mahama served faithfully under president Kufour and so when eight years was up and Kufuor was leaving, the natural order of succession would have been that he should have been given opportunity to lead that party.

"Seventeen people contested against him and defeated him…sometimes I feel sad when I see some of my northern brothers running around and also doing this [supporting them]. They will use you and dump you,’’ he said

Mr Mahama noted the reverse is the case with the National Democratic Congress (NDC) where the party’s National Executive Committee took a decision and made him the flagbearer.

‘‘Who am I a boy from savannah Bole born in Damango to stand here today and call myself the president of the republic Ghana? NDC is the party that is the most national in scope; it is the party that opens its opportunities to all Ghanaians irrespective of where your ethnic affiliation is.

The President added he is looking forward to the day when Dr Bawumia would want to contest for the presidency on the ticket of the NPP.

"They [NPP] will never give it to happen," he told the supporters.