'I was as surprised as you' - Masauku scores bizzare winner as West Ham beat leaders Chelsea - MyJoyOnline.com 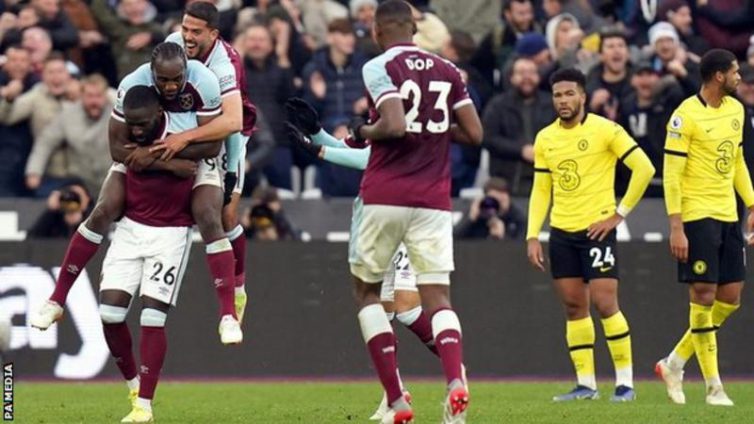 Arthur Masuaku said he was as surprised as everyone else when his misdirected late cross beat Chelsea keeper Edouard Mendy to earn West Ham victory over the Premier League leaders in a pulsating encounter at London Stadium.

After collecting the ball wide on the left with three minutes remaining, Masuaku’s attempted delivery took Mendy by surprise and flew in at the near post to spark jubilant scenes among Hammers supporters.

The win consolidated West Ham’s place in the top four and means they have now beaten Chelsea and Liverpool, two of the three teams above them this season.

“I said to him I thought it was a great cross,” West Ham manager David Moyes joked of the defender’s first Premier League goal.

“It was very fortunate but in football you need a bit of fortune sometimes. In the last few games we have lost it a little bit, but today we got it back.”

Thiago Silva broke the deadlock for Chelsea in the first half, heading Mason Mount’s corner past Lukasz Fabianski via the inside of the post.

Chelsea regained their advantage in spectacular fashion, Mount sending a superb side-footed volley into the corner from Hakim Ziyech’s low cross for his second goal in two games.

Bowen’s low drive from the edge of the area restored parity once more before Masuaku’s remarkable late winner.

The defeat means Chelsea drop to second after Liverpool beat Wolves and could slip to third if Manchester City win at Watford.

“This is a goal that OK, happens,” said Blues boss Thomas Tuchel. “There are no mistakes, just a freak goal – the problem is that it is the winner.

“Overall we did too many individual mistakes. If you do this for three consecutive games you cannot expect always to get a result.

“The schedule we play and effort we play, sometimes you feel tired, but you just need to accept it and control our risk management.

“We hate to lose and we have to digest it now. It is not a performance to be mad about, but in detail we need to be better again.

“If we won the game nobody would have given us the title and if we lose it I don’t think anybody else gets it this weekend.”

After saying Chelsea lacked “the right attitude” in their narrow victory at Watford on Wednesday, Tuchel will be bitterly disappointed at the manner in which they relinquished their grip on proceedings on Saturday.

They appeared in total control after Thiago’s goal, only for Jorginho and Mendy to gift West Ham a route back into the game.

Mendy had enough time to clear the danger after beating Bowen to Jorginho’s backpass, but he opted to take a touch before scything down the former Hull winger.

Mount’s fabulous first-time strike put the Blues back in the driving seat shortly before half-time.

The England midfielder, who delivered another impressive showing, has now been directly involved in eight goals in his past six league games.

Chelsea started the second period on the front foot too, but West Ham remained a threat on the counter and struck when Bowen was given time and space to get his shot away despite Thiago and Andreas Christensen being in close proximity.

There appeared little danger when full-back Masuaku – a first-half substitute for the injured Ben Johnson – collected the ball near the sideline, but he somehow managed to beat Mendy with a powerful drive to inflict a first away league defeat of the season on Chelsea.

The win ended West Ham’s run of three league games without a win since their magnificent 3-2 victory over Liverpool before the international break.

Operating with a back three of Craig Dawson, Moussa Diop and Kurt Zouma, West Ham soaked up Chelsea’s pressure before attempting to strike on the counter.

The impressive Bowen almost made it 3-2 moments before Masuaku’s winner when he failed to steer Michail Antonio’s low cross on target.

West Ham are now only six points behind Chelsea in the table and four ahead of Arsenal, who face Everton at Goodison Park on Monday.