If you allowed ‘Akyem Sakawa Mafia’ protest, why not Agyapa deal – ASEPA accuses police of discrimination 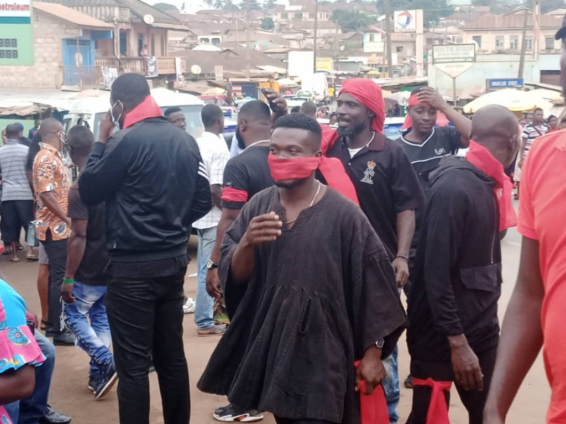 The Alliance for Social Equity and Public Accountability (ASEPA) has condemned what they say is discrimination by the police in the application of the Public Order Act.

The pressure group cites the decision of the police to decline their notification to demonstrate against the controversial Agyapa Minerals Royalties agreement as an unjust one.

The agreement which is geared towards monetising the country’s mineral royalties, per government’s justification will be used to develop essential sectors of the economy including education, housing, health and infrastructure.

But ASEPA will have none of that, for which reason it planned a protest to vent its spleen on the transaction.

In a statement by the Service, it said the demonstration cannot be sanctioned because “restrictions imposed on public gatherings of more than two hundred people without facemasks due to the Covid-19 pandemic has not been fully lifted.”

Executive Director of the pressure group, Mensah Thompson expressed his disappointment at the development especially when the same Executive Instrument was set aside during the demonstration by a group in the Eastern Region to demonstrate against former President John Mahama’s supposed ‘Akyem Sakawa Mafia’ comment.

“Barely a week ago, we saw the police escort a group of people in the Eastern Region to go out and demonstrate in their numbers. The police looked on while these people flouted the safety protocols while they offered protection to these individuals.

“We write to request for the same protection and the police says they can’t provide that and they can’t guarantee that because it’s against the E.I? I think it’s extremely discriminatory,” he said.

ASEPA has been an instrumental part of groups opposing the transaction between Ghana and the Agyapa Mineral Royalties Limited.

Together with other Civil Society Organisations (CSOs), the group believes the deal is shrouded in secrecy and does not have the citizenry’s best interest at heart.

DISCLAIMER: The Views, Comments, Opinions, Contributions and Statements made by Readers and Contributors on this platform do not necessarily represent the views or policy of Multimedia Group Limited.
Tags:
Agyapa Mineral Agreement
Akyem Sakawa Mafia
Alliance for Social Equity and Public Accountability (ASEPA)