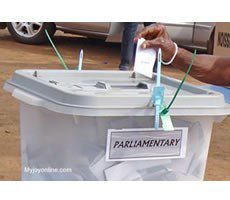 Some Immigration officers at Sampa in the Jaman North District of the Bono Ahafo Region are angry with the Electoral Commission (EC) for refusing to allow them to vote in Tuesday’s special voting exercise.

The EC is currently conducting a nationwide special vote for security personnel and EC staff who will be working on Election Day, December 7.

While the exercise is currently underway, the Immigration officers, who are 25 in number and stationed at the border town, have been turned away by the EC because their names could not be found in the voters’ register.

According to one of the officers, who spoke to Election Headquarters, the EC says they should come and vote on December 7.

The visibly livid officer said that the arrangement was problematic and was likely to burden his colleagues financially as they may have travel to their various polling centres, some of which may be located far away from their duty posts.

He recounted that before the voting exercise, their senior officers asked them all to submit their voter ID cards and names. They are therefore puzzled as to why their names do not appear in the register.