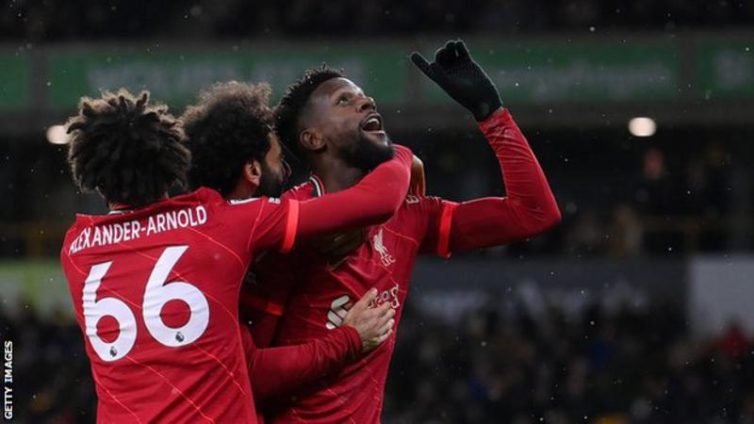 Divock Origi’s strike was Liverpool’s 39th winning goal scored in or after the 90th minute in the Premier League, at least 13 more than other side.

With seconds remaining, Origi latched on to a Mohamed Salah pass, smashing the ball beyond Jose Sa in the Wolves goal.

The win meant Liverpool leapfrogged leaders Chelsea, who lost 3-2 to West Ham in Saturday’s early kick-off, although they will drop down to second if Manchester City beat Watford in the 17:30 GMT match.

Defeat was cruel on Wolves, who had defended heroically for 94 minutes and were 60 seconds away from becoming the first team to stop Liverpool scoring this season.

Liverpool came into this match in blistering form, having scored at least twice in each of their past 18 matches and scoring 14 times in their past four.

But for most of the afternoon, it looked as if they would be denied in front of goal for the first time since drawing 0-0 with Real Madrid last April.

In the first half, former Wolves forward Diogo Jota headed a deep cross narrowly off target while Romain Saiss produced a superb sliding tackle to deny the Reds’ Salah a tap-in.

And in the second period, Liverpool continued to dominate as Thiago was denied by a combination of Raul Jimenez and Sa before former Jota missed a huge opportunity, seeing an effort blocked on the line by Conor Coady with the keeper stranded.

It looked as if that would be the game’s best chance but the Reds kept up the pressure and were awarded for their attacking intent with just one minute of stoppage time remaining when Origi broke the deadlock with his fourth goal of the season.

Spirited defensive efforts have become a regular habit for Wolves who boast the third-best defensive record in the Premier League and were seconds away from a fourth clean sheets on the bounce.

As they were cheered on by a boisterous home crowd on a cold afternoon in the West Midlands, the hosts were content to sit back and rarely threatened going forward.

Wolves managed just three shots compared to Liverpool’s 17.Bruno Lage may look towards his attackers as one area to improve upon going forward.

Wolves, who have Chelsea and Manchester City to face before Christmas, have now failed to score in eight of their 15 league games this season.

Defeat sees them remain in eighth, six points off the top four and 11 clear of the relegation zone.