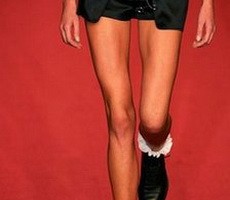 The Israeli government has passed a law banning the use of underweight models in advertising and on the catwalk.

The new law requires models to provide medical proof of their weight, and for adverts to state if an image has been altered to make a model appear thinner.

Supporters of the bill believe images of extreme thinness are to blame for eating disorders in young girls.

Critics say the legislation should have focused on health not weight, as some models are naturally very thin.

Models in Israel are now required to have a body mass index (BMI) – a calculation based on a ratio of weight to height – of no less than 18.5.

They will need to have an up-to-date doctor’s report certifying their weight when they go for jobs. Publications will have to specify if the image of a model has been manipulated to make them appear thinner.

Around 2% of girls in Israel aged between 14 and 18 have severe eating disorders – a rate similar to other developed countries – anthropologist Sigal Gooldin is quoted by the Associated Press as saying.

Rachel Adato, the Knesset member who pushed for the bill, said she hoped the law would encourage the promotion of a more healthy body image.

“Beautiful is not underweight, beautiful should not be anorexic,” she said.

The fashion industry has long been blamed for encouraging anorexia and bulimia among girls of an impressionable age by its use of very thin models on catwalks and in magazines.

But Eli Edri of the Roberto Models Agency told Haaretz newspaper that the BMI index on which the law is based was “arbitrary” and “not appropriate for every model”, some of whom are naturally thin and cannot gain weight.

“I know many models who are totally healthy girls who might be disqualified because of the law,” he said. “Such a law would disqualify them without determining whether they are really sick or not.”

Top Israeli model Adi Neumman has said she would fail to qualify for jobs under the new legislation as she has a BMI of 18.3, even though she eats well and exercises.