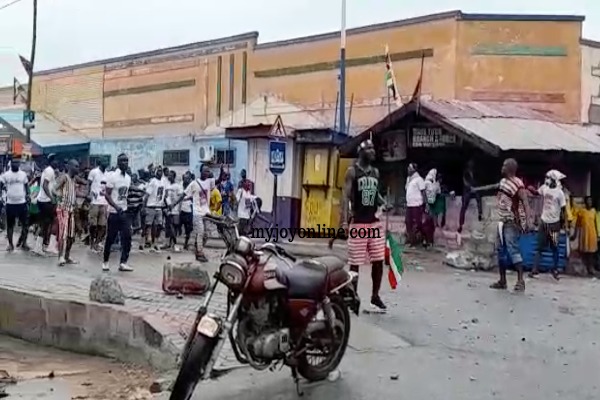 The Odododiodoo MP has alleged that Sunday morning violence that ensued in Jamestown was orchestrated by supporters of the New Patriotic Party (NPP).

According to Nii Lante Vanderpuye, the supporters of the National Democratic Congress (NDC) were the victims of the melee which he argues was premeditated.

Speaking to JoyNews, the NDC MP explained that the move formed part of the NPP’s plans to adopt a violent approach to intimidate the opposition ahead of the December 7 election.

His comments come after a peace walk in Jamestown over the weekend turned chaotic.

Supporters of the NPP and NDC in a circulating video on social media were seen throwing bottles, hauling stones and insults at each other in the Odododiodio constituency on Sunday morning.

Some supporters from both sides sustained various degrees of injuries with properties running into thousands of cedis destroyed.

Narrating what happened, he said, “All that we heard was that the people behind us were being pelted with bottles…

“Every morning around that time you’ll not see more than five NPP supporters in that particular place. So where did almost about 25 to 30 people come from yesterday? It means they had planned to meet them.

“So when they pelted our people, then our people also decided to respond because so when they threw the bottles at them some don’t break so they decided to pick them up and throw them back,” he said.

“We have a government that has done nothing for the country. They are so disgraceful that and they think it is only violence, intimidation and brutalities that they can use to suppress the anger of the people and still maintain themselves in power.

At a press conference organised by the NPP, led by the Parliamentary aspirant, Nii Lante Bannerman, he laid the blame at the feet of the opposition party.

In what has become the trading of accusations, Mr Vanderpuye told Emefa Apawu that, his party supporters only retaliated when the incident escalated.

He added that most of the perpetrators were involved in other acts of vandalism in the past and have been left off the hook.

“They should continue. The people are now seeing the difference between a matured group of people and hoodlums,” the MP added.

Meanwhile, the police have begun investigations into the incident on Sunday.