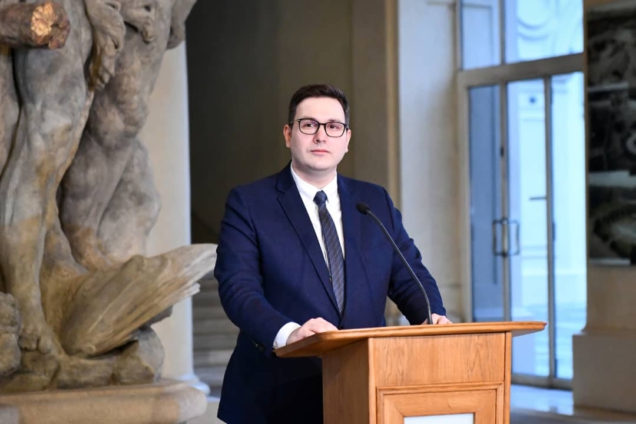 This year, the celebrations of the victory in World War II are being overshadowed by blood and suffering on the territory of Ukraine and destruction of Ukrainian cities.

Ghosts of the new aggressive, neo-colonial war of the empire, hungry for more territory, cast their dark shadows on these days, which are usually connected to celebration of peace.

The unprovoked, illegal Russian aggression against its smaller democratic neighbor should make us think about how memory can be violated for the sake of neo-imperial policies. The traditional event at the Red square in Moscow has gradually changed its original purpose.

It was supposed to be the humble expression of gratitude and remembrance of Soviet heroes of many nations including Russians and Ukrainians, but it evolved into a state organized propagandist showdown and demonstration of power.

In the past years, threats usually accompanied the speeches, but this year threats have materialized into a war. The heroism of victims in WWII has been used to make the case for the strong hand of a ruthless authoritarian regime and its expansive dreams of colonial revival.

Czechoslovak WWII experience with a powerful neighbor (Totalitarian Nazi Germany) who invaded a smaller neighbor under the pretext of “liberating” the German speaking population was a preface of much greater war – because this “liberation” was not stopped and did develop further. This lesson-learned should not be forgotten.

Czechoslovakia saw another false “liberation” in 1968, when an invasion army of almost half a million soldiers fulfilled the order from Moscow and killed hopes and promises of freedom of the Prague spring. The following Soviet occupation turned a proud and independent country into a broken Soviet colony from which Europe was kidnapped – as Milan Kundera famously reminded the world.

In other parts of the planet, the 60s were luckier and brought great decolonization movements. Empires were shaken and many nations of different continents were allowed to taste freedom.

The former Soviet satellites like Czechoslovakia together with nations kept as part of the Russian and later the Soviet empire had to wait another thirty years for the same delight. But with the end of the Cold War they also celebrated their moment of joy. This was how true liberation looked like.

The victory in WWII, together with the decolonization process and the end of the Cold War were the greatest leaps of humanity towards freedom in the 21st century. Its beginning was bringing hopes that “Munich moments” when a smaller state fell victim to a bigger neighbor and “Brezhnev doctrines of limited sovereignty” will not be repeated.

Putin’s war of choice is stealing peace and lives from millions of Ukrainians but will come to haunt us all. Russian society will be severely hurt as well. Dead bodies of soldiers returning to their mothers and wives in bags write another tragic chapter of the complicated Russian history.

The Russian economy will shrink to the levels of the 90s and all the economic growth and prosperity of the last 30 years will be erased. Russia will end as a poor and isolated country. Putin’s war is not in Russia’s interest.

Weaponizing gas and oil is hurting many economies in Europe and elsewhere. The Russian army targeting the infrastructure of stocking the grain and Russian blockade of ports and other export routes can provoke hunger of millions of other citizens in many countries in Africa and the Middle East.

Traditional donors from the EU and US will have economies weakened and less capable to perform robust development assistance to poorer/developing countries. They will have to undertake a gigantic reconstruction effort in Ukraine. These resources will be missed elsewhere.

No one in the world was in need of this war but evil cannot prevail. We all should refuse the phantoms of colonial ages, ghosts of neo-imperialism, we cannot allow the rules-based international order to be destroyed and replaced by the power-based division of the political map to the spheres of influence.

Illegal aggression cannot be tolerated and all peace loving people should unite in sending the anti-war signal. Let’s reject the Orwellian analogies where truth is a lie and war is called “liberation”. Let’s support Ukraine and hope that next year the celebrations of the end of WWII will turn back to what it should be – the remembrance of victims and fallen heroes and the promise for peace.

The author is of this piece is Jan Lipavský, Foreign Minister of Czech Republic.