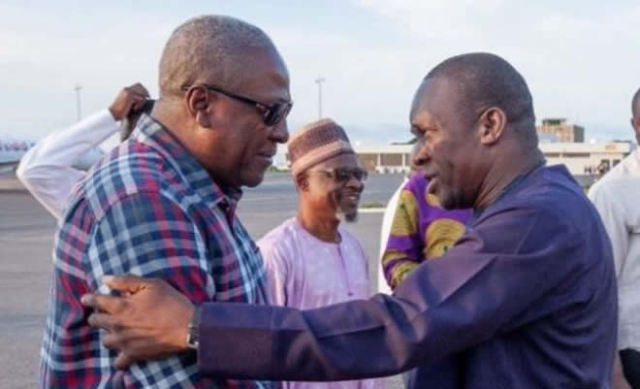 The race for the Presidential nomination of the National Democratic Congress (NDC): the twists and turns, the dead-on arrival ambitions, the ambition over group interest and matters arising

It is August 2018. Precisely 18 months since the National Democratic Congress –which prides itself as the most successful political party in the Fourth Republic and rightly so – lost power in the most dramatic fashion.

And the game is on for the next presidential ticket in the next elections.

As with parties in opposition, the scramble and strategizing for the presidential nomination must have begun on the night the Chairperson of the Electoral Commission, Mrs Charlotte Osei, who uttered those painful words, “by the power vested in me as the chair of the Electoral Commission, I wish to declare Mr Nana Addo Dankwa Akufo-Addo, president-elect.” Those words confirmed what Joy News had projected nearly 24 hours earlier and it pierced the hearts, punctured the aspirations, shattered the dreams, and dampened the spirits of many in the NDC.

Contrarily, and politics is a game of contradictions, some in the party saw the loss as an opportunity to take a shot – no matter how long or dim – at the presidency on the ticket of the party.

If all those who have indicated their interest in the slot do run, it would be the largest number of candidates vying for the position of presidential candidate in the NDC’s 26-year history.

In the 2000 elections, there was no contest at all. There was what famously became known as the “Swedru Declaration.” Strongman and president at the time, Jerry John Rawlings shrugged off grumblings from some of his key men and anointed his Vice, Professor of law, tax guru and university don-turned-politician, John Atta Mills (2nd John if you like), as the party’s nominee.

Disgruntled Goosie Tanoh broke away from the NDC in protest and formed the National Reform Party, an act which would prove political suicide for the fine Volta native who believed himself a worthier successor of Mr Rawlings.

Prof. Mills, who lost the 2000 elections, was returned in 2002 as the party’s presidential nominee after fending off a challenge from well-educated, beautifully-spoken, longest-serving Finance Minister under Rawlings’ Provisional National Defence Council (PNDC), Dr Kwesi Botchwey. Dr Botchwey’s affable personality fuelled a promise he could truncate Mills’ misery who as Vice-President lost the 2000 elections to John Kufuor. But the law professor was a survivor. He survived the scare. Four years later, the contest was even keener in 2006. Former Education Minister, Ekwow Spio-Garbrah, who almost felt entitled to the leadership of the party, business mogul, Eddie Annan and Wa native and Rawlings confidante, Alhaji Mahama Iddrisu, challenged the man who was battling ill-health, for the slot.

Against the odds, Prof. Mills saw the three off as the party’s base, and believed he represented their best chance of ending the eight uncomfortable years in opposition. After three excruciating rounds of voting, the law professor literally dragged himself and a limping opposition party across the 50 plus one line in the 2008 elections.

Now ten men are jostling for the slot and are expected to pick nomination papers when the party opens nominations later this year.

We will be analysing each of these men, assessing their chances and projecting how they will do if they do eventually run.

This man has a glowing political CV. He is the longest-serving Member of Parliament. He has been returned to Parliament by the people Nadowli/Kaleo in the Upper West region, seven consecutive times.

Mr. Bagbin is the current Second Deputy Speaker of Parliament, has been Minister of Health as well as Works and Housing.

But the man’s role as Minority Leader between 2001 and 2009 is what endeared him to many both in outside of the NDC. He led with the courage of conviction and troubled the John Kufuor government a great deal. On one occasion he dragged the government before the Commission for Human Rights and Administrative Justice.

Alban Bagbin has quite a reputation for not running away from controversy. He criticised President Mahama when nobody in the party would dare do that. In response to his criticism, the then president said those who wanted to see his back, “2016 is just around the corner.”

That 2016 came, and indeed Mr Mahama was out of the presidency. Bagbin saw this as an opportunity to realise his long-held ambition to be president.

He has remained the most vocal critic of the former president, holding him directly responsible for the party’s loss.

Ordinarily, the consummate politician has the political connections in the NDC to easily win the presidential nomination and the history to back. But a lot has changed since the time his career skyrocketed as a Minority Leader and he has lost some of the lustre he had.

The other factors that may militate against his campaign are his recent gaffes and the deep pocket needed to prosecute a successful campaign. He appears to be a likely favourite of the party’s Founder, Mr Rawlings.

But even the former president has had cause to issue a statement condemning his comments about persons with disability appointed into government by President Mahama.

Since entering Parliament in 1997, Mr. Mahama was always a star in NDC circles and even nationally. His soft-spoken nature and calm demeanour endeared him to many both in and outside the NDC.

In 2008, when then-candidate John Mills settled on him as running mate, there was no controversy except minor grumblings from the founder of the party and his wife, Nana Konadu Agyeman Rawlings who favoured Betty Mould Iddirsu.

Mr Mahama brought fresh energy, vigour, and renewed enthusiasm to the NDC ticket for that election. After three rounds of voting, the former tax law teacher and his Bole native won the election so Mr Mahama became Vice-President.

As fate would have it, the president died and Mahama became president in accordance with the Constitution. He proceeded to run the 2012 election and won.

Right after the elections, Mr Mahama’s government struggled with a power crisis that did not appear to be anticipated – a crisis that would define the president’s tenure.

But more than just the energy crisis, his government was dogged by a litany of allegations of corruption – some of which the government struggled to extricate itself from.

Consequently and for among other things, Mr Mahama lost the 2016 elections by a wide margin and in an embarrassing manner. He became the first incumbent president in the fourth republic to lose a re-election bid.

Mr Mahama appears to be determined to undo this blot on his political CV and is, therefore, running for the nomination of the NDC for the 2020 election.

His candidature is the surest yet single most divisive issue in the NDC. If Mr. Mahama does get elected as President, he can only serve one term, having already done his first. He will, therefore, be barred constitutionally from running for another term after serving one more term.

Looked at from any angle, the candidature of the former president puts the NDC in a very difficult, confused state.

First, he represents the party’s brightest chance at winning the next election, however, dim the prospects. He is a household name. He has name recognition. He remains a superstar. He has the nobility, the charisma, and the political acumen to back a claim for the presidency, and of course, the bucks to run a campaign.

However, Mr. Mahama appears to be putting personal interest over and above group interest. This is why: After he is done with his second term (if he wins 2020), the NDC would be left with the grim prospects of presenting an entirely fresh candidate for the presidency in 2024. No new candidate has won the presidency since 1992. John Kufuor won on his second attempt and actually won after a run-off. John Mills, who was vice-president, won after three attempts and also won after a run-off.

President Akufo-Addo tried three times, too. So if Mr Mahama does win in 2020 and leaves the presidency in 2025, the NDC in 2024 would have a fresh NDC candidate without the history backing. This is perilous for the party.

Related to this is the argument that since again traditionally, at least since 1992, every party has been given two terms, the prospects of winning the 2020 elections are bleak. It makes for a sensible argument for the NDC to choose a candidate who can be marketed in 2020 and primed for the 2024 elections – a candidate who can run for two terms. This has been the main argument of Spio-Garbrah, a contender in the race. This is in the overall interest of the party.

Another thing that may plague a John Mahama candidature is what another contender, Alban Sumana Bagbin described as a 'friends and family government'. In NDC circles, Mr. Mahama is heavily criticised in hushed tones for alienating the core support base of the NDC. Many people in the traditional stronghold of the Volta region maintain the region and its people were largely ignored both in terms of tangible development and representation in terms of appointments in the government.

The election results are telling. Mr Mahama obtained 80.97% of valid votes cast in the Volta region in 2016 compared to 85.47% in 2012. Given that, the turn out in the region was low, a five percentage point drop of lower turnout was quite significant. This was a protest and vote of no confidence of sorts, Mr Bagbin insists.

It is, therefore, not surprising that stalwarts of the NDC from the region like Victor Gbeho will openly campaign for Prof. Alabi.

Having endured what they called neglect, the Voltarians are clearly looking for a candidate that may consider an influential native of the region for at least a running-mate position. This will be necessary to reignite the passion the residents of this region. Many point to former Speaker Doe Adjaho, himself a former MP from the region, as one possible candidate for running-mate, a man whose selection as Speaker spawned spontaneous jubilation on the streets of the town and villages of the region. It is speculated that Mr. Mahama will not consider someone from the region.

Also, clearly Mr Mahama comes to the ticket with baggage. While the man was truly loved, his leadership attracted opprobrium for lack of decisiveness and clarity of purpose. Anti-corruption campaigners and civil society organisations are unanimous, in their view, that he did very little in fighting against graft and ostentation in his government. He will, therefore, struggle to convince the electorate that he can do anything different.

Many, especially the old guards in the NDC, believe that Mr Mahama’s leadership of the NDC damaged the party’s brand as one for the poor masses. Instead, they said profligacy and ostentation became the order the day, narrowing the difference between the NDC and their opponents, the NPP, whom it had always accused of being an elitist party.

Closely related to this is the view that the president did not deliver to the satisfaction of the electorate and this reflected on the emphatic rejection of his re-election bid.

Mr Mahama is the overwhelming favourite to win the nomination but he may lead a fractured party into 2020 and probably leave it in a much worse state when he eventually bows out of the stage, whether or not he gets the opportunity to clean the blot on his rather unblemished record until 2016.