Justifiable Self-Defense Is a Moral Imperative! 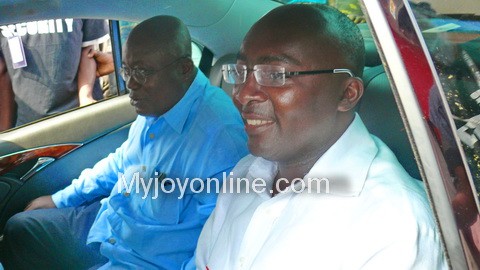 I don’t know what the Bui Dam Woyome is up to these days, but it is rather disgusting to hear Mr. Johnson Asiedu-Nketiah accuse the presidential candidate of the main opposition New Patriotic Party (NPP) of violent and intemperate rhetoric when, in reality, it is the members, supporters and sympathizers of the “mis-ruling” National Democratic Congress (NDC), so-called, who have been causing most of the incidents of physical violence in our national political arena (See “All-Die-Be-Die: Nana’s Obstinate Posture Is Reckless – Asiedu-Nketiah” Ghana News Agency/JoyOnline.com 7/6/12).

What Mr. Asiedu-Nketiah and his cynical band of desperate political thugs ought to get loud and clear into their apparently stolid eardrums, is that what matters most is not what some timid and bought over “religious leaders” may think and/or have to say about Nana Akufo-Addo’s call for measured self-defense, on the part of his supporters against wanton physical assault and intimidation by hired hands of President John Evans Atta-Mills and the NDC, but what these so-called leaders of conscience have actually done, in material terms, to stem the wanton wave of such atrocities against members, supporters and sympathizers of the organized opposition.

Indeed, rather than vacuously question Nana Akufo-Addo’s commitment to peace in the lead-up to Election 2012, it is the studious commitment to abject hypocrisy on the part of these so-called religious leaders which ought to be marveled at. For instance, how many of these so-called gentlemen and women of the cloth organized protest marches against the barbarous brutalities of key NDC operatives like Nii Lante vanderpuije and Chairman Ade Coker? It is also significant to point out that the kind of economic rip-off of the Ghanaian taxpayer being orchestrated by the likes of the Bui Dam Woyome is far more violent than any self-defensive rhetoric issued by the Akufo-Addo Campaign.

And so, perhaps, the hornet-mouthed NDC general-secretary would be better off apologizing for his irreparable act of criminality vis-à-vis the Bui Dam Project, than fatuously presuming to possess a moral grandstand with regard to the blind and reckless pursuit of violence in Fourth-Republican Ghanaian politics. Indeed, what “General Mosquito” ought to worry about is less the fact of Nana Akufo-Addo’s “All-Die-Be-Die” credo having remarkably galvanized the latter’s electoral base, than any mischievous and/or dastardly attempt by the Mills-Mahama gang of bullies to rig the December 7 general elections. For, it is only if the latter incidence of electoral theft and fraud occur that the NDC Abongo Boys would really learn to appreciate the need not to take democracy-loving Ghanaians for granted.

Already, we have several key NDC players laughably projecting their party as having already clinched 54-percent of the Election 2012 ballot, a full four months ahead of schedule. Is this the kind of language that Mr. Asiedu-Nketiah would have Ghanaians envisage as being conciliatory and image-enhancing for the country before a studiously observant international community?

It clearly goes without saying that any “exemplary democratic” and “giant economic” strides registered by the country in the last few years have more to do with the yeomanly efforts of key New Patriotic Party players like former President John Agyekum-Kufuor, Dr. Mahamudu Bawumia, Messrs. Osafo Maafo and Baah Wiredu (of blessed memory) and, of course, Nana Akufo-Addo than the likes of Mr. Asiedu-Nketiah, Dr. Kwabena Dufuor, President Mills and Vice-President John Mahama.

It is also rather laughable that Mr. Asiedu-Nketiah would so casually presume to quote the Washington, DC-based think tank, The Center for Strategic and International Studies, to impugn the political credibility of Nana Akufo-Addo. One would have thought that a pro-Russia and pro-China “Social Democrat” like Generalissimo Mosquito would have generously and profusely quoted scholars and researchers at the Mao Zedong and/or Vladimir Lenin centers for socialist/communist dictatorship to shore up his argument; or even the Fidel Castro Center for Nepotism in Havana, Cuba.

Anyway, let me quickly and relevantly point out that Dr. Kofi Ellison, a Ghanaian national resident in Washington, DC, the same metropolis in which The Center for Strategic and International Studies is located, has thoroughly investigated the foregoing allegation, and has even personally communicated with the author of the alleged report, who expressed regret and great disappointment that some political opponents and detractors of the presidential candidate of the New Patriotic Party would so facilely resort to grossly distorting some of his research findings and prognostications, in order to score cheap political points in the lead-up to Election 2012.

Then again, who is more of an ethnic chauvinist? President John Evans Atta-Mills who, in 2008, passionately appealed to the basest instincts of Akans of Fante sub-ethnic descent not to vote for Nana Akufo-Addo, because the latter candidate was not one of their own? Or Nana Akufo-Addo, who chooses to envisage all Akans as legitimately belonging to one great ethnic sub-nationality?

Kwame Okoampa-Ahoofe, Jr., Ph.D., is Associate Professor of English, Journalism and Creative Writing at Nassau Community College of the State University of New York, Garden City. He is Director of The Sintim-Aboagye Center for Politics and Culture and author of “Selected Political Writings” (Lulu.com, 2008). E-mail: okoampaahoofe@optimum.net.