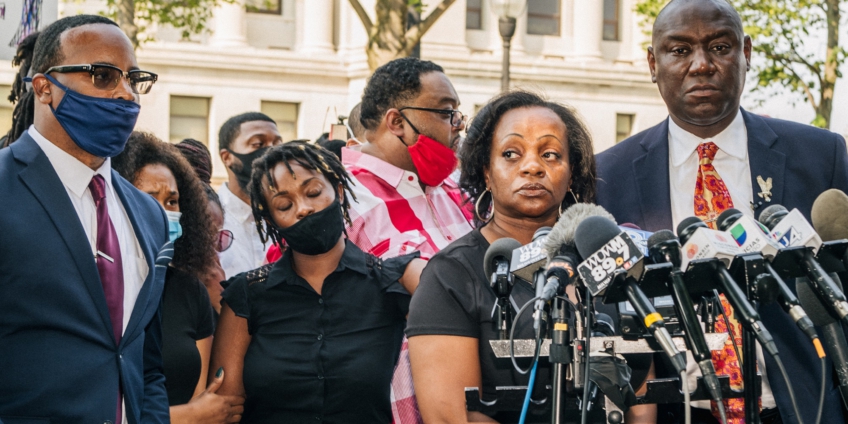 KENOSHA, WI - AUGUST 25: Julia Jackson, mother of Jacob Blake, prepares to speak during a news conference on August 25, 2020 in Kenosha, Wisconsin. Video shot of the incident appears to show Blake shot multiple times in the back by Wisconsin police officers while attempting to enter the driver's side of a vehicle. The 29-year-old Blake was undergoing surgery for a severed spinal cord, shattered vertebrae and severe damage to organs, according to the family attorneys in published accounts. Brandon Bell/Getty Images/AFP

On the the third night since the police shooting that left Jacob Blake severely injured, demonstrators in Kenosha again defied curfew and were confronted by officers in riot gear who fired tear gas into the crowd.

‘They shot my son seven times!’ Blake’s dad speaks out to media.

An overnight shooting left one dead and two others wounded, according to reports in The New York Times.

Kenosha County Sheriff David Beth told The Times shots rang out along a street near a gas station early Wednesday.

The sheriff’s office is investigating whether the shooting resulted from a conflict between demonstrators and a group of men with weapons who were protecting businesses.

CNN has reached out to the Kenosha Police Department and the Kenosha County Sheriff’s Office.

Jacob Blake’s sisters: His family is his worldOn Tuesday, Blake’s family called for peaceful protests, condemning the destruction that the city of Kenosha has seen over the past nights, including buildings and cars set ablaze.

Following the first two nights of unrest, Wisconsin Gov. Tony Evers declared a state of emergency and upped the number of National Guard members deployed to Kenosha County to 250.

“As I was riding through here, through this city, I noticed a lot of damage that doesn’t reflect my son or my family,” Julia Jackson, Blake’s mother, said.

“If Jacob knew what was going on as far as that goes, the violence and the destruction, he would be very unpleased.

A Wisconsin police officer yesterday shot Jacob Blake 7 times in the back. His 3 children were in the car, watching their father being shot.

On August 28th, we will be marching against police brutality in Washington, DC, demanding justice. pic.twitter.com/ibrPD66Y1t

“Blake, a Black man, was shot by police Sunday evening, after his attorney Ben Crump says he tried to break up an argument between two women.

A video filmed by a man from across the street shows an officer following Blake at close range and pulling on his tank top as Blake tried to enter an SUV.

Seven shots are heard. In the SUV were Blake’s three children, the attorney has previously said.

Blake underwent surgery Tuesday afternoon and his family says he is now paralyzed from the waist down. 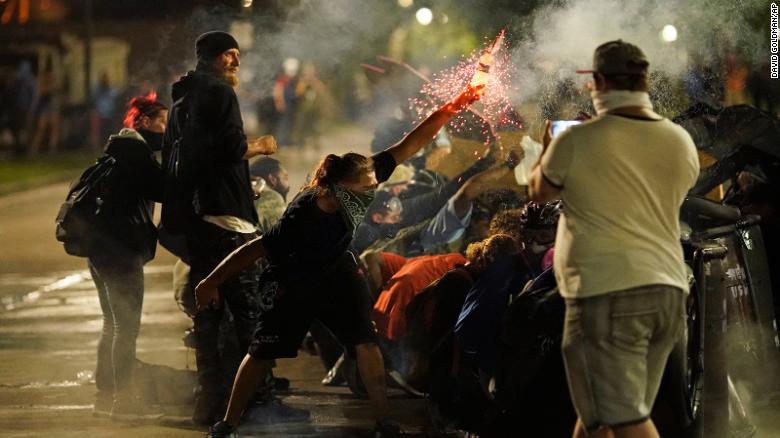 His shooting like several others in recent months sparked nationwide demonstrations, with protesters demanding police reform.

After George Floyd died in Minneapolis as police pressed a knee to his neck, demonstrations across the country lasted for weeks and in many cities, never stopped.

A protester tosses an object toward police during clashes outside the Kenosha County Courthouse late Tuesday in Kenosha.

‘Why did police shoot my daddy?’

Patrick Salvi Jr., a family attorney, said Blake suffered multiple injuries following the shooting, including a gunshot wound to one arm, damage to his kidney, liver and spinal cord.

Jacob Blake’s family hopes he can recover and have a ‘great quality of life,’ his uncle says”He had a bullet go through some or all of his spinal cord, at least one bullet,” Salvi said.

“He has holes in his stomach. He had to have nearly his entire colon and small intestines removed.” Crump said it would take “a miracle” for Blake to ever walk again following the shooting.

In an emotional statement, Blake’s father, Jacob Blake Sr., thanked those who were supporting the family.

“They shot my son seven times, seven times. Like he didn’t matter. But my son matters,” he said. “He’s a human being and he matters.”

According to Blake’s attorney, Blake’s sons 3, 5 and 8 years old watched the scene unfold from the car.” All my grandson asks repeatedly is ‘Why did police shoot my daddy in the back?'” Blake’s father said Tuesday.

Two Kenosha officers have been placed on administrative leave since the shooting.

The local police union has urged the public to withhold judgment until a state investigation is complete.

To the Kenosha Police Department,

If you do not name the officer who brutally shot Jacob Blake on Sunday, we will simply begin naming officers from your department who may or may not be him.

Your protection of his identity is unethical.

The shooting is being investigated by the Kenosha County District Attorney Michael Graveley’s office and the Wisconsin Justice Department’s division of criminal investigation, which plans to present a report to Graveley’s office within 30 days, it said.

“We’re asked to make two determinations,” Graveley said. “One, did any office in this case commit any crimes, and two, are there any crimes that we believe were committed that we can prove beyond a reasonable doubt?”

If the answer to both questions is yes, Graveley said he will file charges.

Crump on Tuesday called for prosecutors to arrest the officer who fired at Blake and asked for all officers “who violated the policies and their training to be terminated immediately.”

The family of Jacob Blake has retained @BenCrumpLaw. We will seek #JusticeForJacobBlake and his family. We demand answers from @KenoshaPolice. pic.twitter.com/hpOr2tmdif

“People question why we have to say ‘Black Lives Matter’ — this is why. Because Julia and Jacob Sr.’s son was not treated with the humanity that we often give our white brothers and sisters.

While the shooting is being investigated by state and local officials, federal investigators are reviewing the circumstances surrounding the police shooting, a federal law enforcement source told CNN on Tuesday.

The US Justice Department and FBI agents in Wisconsin are gathering information in order to determine whether a federal civil rights investigation will be launched, the source said.