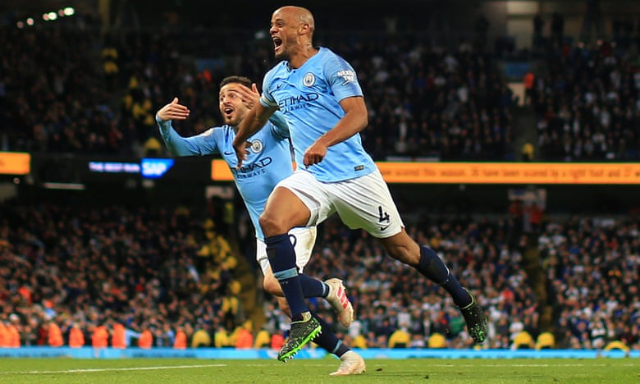 Manchester City know they will retain their Premier League title if they win on the final day of the season after Vincent Kompany’s wonder strike saw off a spirited Leicester side.

With 20 minutes remaining, the score goalless and nerves jangling at Etihad Stadium, the defending champions needed inspiration in a game where only victory would maintain their initiative at the top of the table.

They got it from an unlikely source in their long-serving captain, who strode forward and let fly from 25 yards with a strike that arrowed into the top corner of the net.

City’s victory means they move back above Liverpool and hold a one-point lead as they go into the last round of fixtures on Sunday, when Pep Guardiola’s side travel to Brighton and the Reds host Wolves.

After they had to fight so hard to gain victory here, it is unlikely City will take anything for granted as a pulsating title race reaches its climax.

The lead at the the top of the table has now changed hands 32 times this season, but for long spells on Monday night it seemed Liverpool would be staying in top spot until the weekend at least.

Managed by former Liverpool boss Brendan Rodgers, who came so close to bringing the title to Anfield in 2014, Leicester were resolute defensively and posed a significant threat at the other end.

They restricted Guardiola’s famously free-scoring side to a handful of first-half chances, with Sergio Aguero’s header against the bar the closest they came to breaking the deadlock.

City’s frustration on the pitch and in the stands continued after the break until Kompany stepped up in spectacular fashion to score his first goal of the season, and his side’s 158th.

Leicester did threaten to ruin the party late on but former City striker Kelechi Iheanacho fired wide, and the final whistle brought cascades of relief for the home players and fans as they moved to within one win of their sixth title.

If the defending champions beat Brighton in their final fixture they will amass 98 points and cannot be caught.

City would also become the first club to secure back-to-back Premier League titles since rivals Manchester United in 2007-08 and 2008-09.