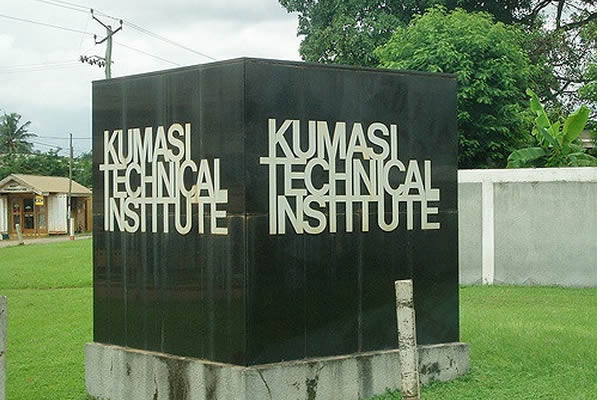 Lawless display by students of the Kumasi Technical Institute in the Ashanti region last Tuesday was met by a police response deemed excessive, extreme and abusive.

Rowdy KTI students blocked road in front of the school, created an artificial traffic during the celebration of a fourth position chalked by the school in an Inter-Schools competition – the biggest sports festival for students.

At that point, the police force erupted. Ashanti regional correspondent Erastus Asare Donkor reports, the might of the armed men prevailed over the armless.

"They are students but I can assure you they not children" ASP Tanko explained the threats the students posed to the peace.

Tear-gas filled the air and running boots of police men filled the ground as they chased the students helter-skelter in a general pandemonium that descended on the institute Tuesday night.

And so rushing down from outside the school, heavily armed police officers spread into classrooms, dormitories like tributaries.

"I have never seen a situation where the police will chase students into the school, into [their] dormitories", a teacher decried what he observed as extreme manhandling.

"They were beaten like armed robbers. I think in a civilised [society], if you are fighting somebody and he runs for refuge, you do not chase him into his bedroom", a doctor treating 15 injured students expressed his disgust.

Erastus Donkor said the police shut down the power supply to the school and entered dormitories with torchlight in search of 'stubborn' insubordinates.

"It was total pitch darkness", he said.

Female dormitories were not spared as protestations from house mistress did nothing to discourage a search-in-the-dark, watch-and-arrest operation – inside the girls dormitories.

"You could see students getting out of the windows…you could find blood stains on the doors" Erastus Asare Donkor witnessed the chaos.

In adrenaline desperation, some students removed louvre blades, destroyed the mesh and jumped two storey dormitories injuring scores of students in the process.