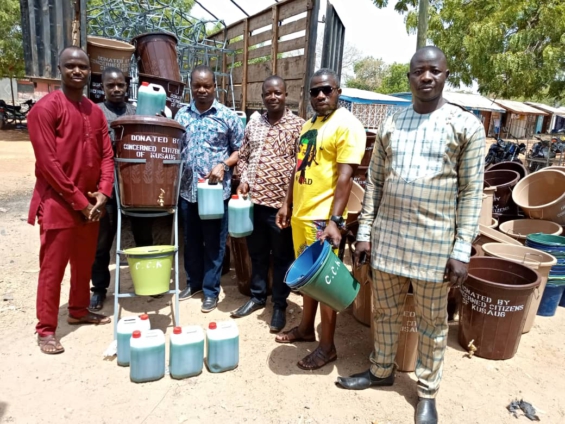 The Concern Citizens of Kusaug has donated gallons of locally manufactured liquid soaps, and 60 Veronica buckets among others, to market women and lorry stations in the Bawku area to help combat the spread of COVID-19.

The group, which is made of members of the area, say the cannot sit aloof and allow government alone to fight the virus.

President of the group, Alhaji Seidu Zakari Bo-umziel Beig, who led the delegation to handover the items at the Bawku Naaba Palace says the donation was in line with the call made by the President to support the fight against COVID-19 currently causing havoc in parts of the world.

“We know we are vulnerable and, therefore, we must protect our people,” he said.

The donation has become necessary because of the town and surrounding areas share borders with Togo and Burkina Faso and therefore residents are vulnerable to the disease.

Receiving the items for onward distribution, Binaba Chief, who stood on the Bawku Paramount, thanked members of the group and urged them to continue to support humanity.

President, Alhaji Bo-umziel Beig promised his outfit would not let the people of Kusaug down as they rollout many initiatives to combat the virus.

He says once the Upper East region has recorded one case it is a wake-up call for them to up their game.

Meanwhile, immigration and customs service in the area have taken delivery of six motorbikes from Six Municipal  District Chiefs Executives to strengthen its operational activities in the various borders.

The security agencies are expected to intensify their patrols around the porous borders with limited security facilities.

DISCLAIMER: The Views, Comments, Opinions, Contributions and Statements made by Readers and Contributors on this platform do not necessarily represent the views or policy of Multimedia Group Limited.
Tags:
Bawku
Coronavirus
Covid-19
Donation
Kusasu