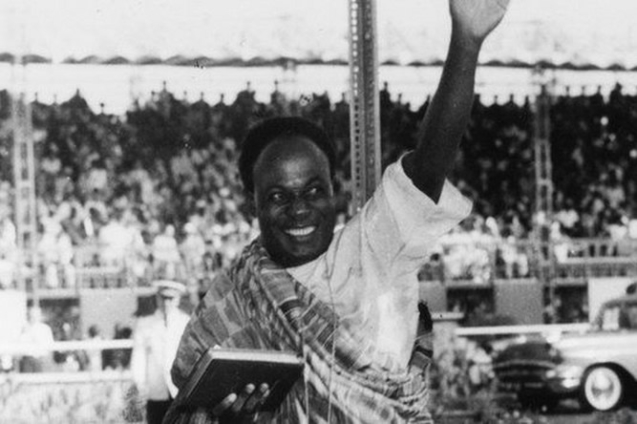 There was no Kwame Nkrumah Mausoleum to visit that day. His mausoleum is under rehabilitation. But I realised that Ghana, our beloved country, rather went low key on celebrating the personality himself.

But I was creative. What I did then was to allow my mind the freedom to drift into recent experiences on Osagyefo, and pretend I had already observed the event.

I quickly remembered two things. Last month, I said hello to Samia Nkrumah, Osagyefo’s beloved daughter at my brother’s 77th anniversary party at East Legon. That could pass for my Nkrumah Memorial day.

Secondly I could recall my visit to the renovated Ghana Museum in Accra in June this year. That would be commemorative as well. The Ghana Museums Board had done a wonderful job of retrieving into the new museum, Kwame Nkrumah’s official car, his black limousine of 1960 vintage.

It was perhaps in that ‘limou’ Nkrumah rode with Queen Elizabeth II, when she visited Ghana in 1961.

I am happy the government, even though not overenthusiastic about Osagyefo, has kept Kwame’s memory alive, whether he was founder or part of founders. To me, Kwame Nkrumah was a great Ghanaian leader; and human as he was, had shortcomings.

The best a nation can do is to emphasise Nkrumah’s strengths, and showcase these for national development, and emulation by the youth. Methinks the debate on founder or founders need not be overdone. There is more work to do than the semantics of nation building. Work dey for ground.

The best I could do on the Nkrumah Memorial Day itself was to visit Mensah Sarbah Hall, Legon, my alma mater. This was not by happenstance. The gentleman after whom the Hall was named, John Mensah Sarbah was a great personality and Nkrumah’s idol.

In establishing the newest hall of residence at Legon in 1963, Dr Kwame Nkrumah confesses having been inspired by a personality who was dear to his heart, and whose noble works and ideals he sought to emulate. That was John Mensah Sarbah: jurist, statesman, educationist, and nationalist.

Sarbah, the torchbearer in the founding of Mfantsipim, Ghana’s earliest secondary school virulently fought for gender equality in the law courts; and this is what Nkrumah sought to extend to higher education.

Sarbah Hall, with its mixed gender from the very beginning, was experimental in Osagyefo’s vision. Nkrumah in 1963 couldn’t attend the commissioning of Sarbah himself, and sent his minister Kojo Botsio to read his speech.

Considering the blend of the Nkrumah-Sarbah vision then, I visited the Hall on Nkrumah Memorial day. But that was also at a time Mensah Sarbah Hall was still in mourning clothes. The bust of their mentor had still not been found since it was snatched early March, allegedly by the Vandals during a night clash.

What was left of the monument, was the stump, an empty pedestal on which stood the great mentor of students. The overnight disappearance of the monument made a profound impact on my person, since I led the process of installing the bust in February 2002, as Hall Master.

Early afternoon last Wednesday, we led scores of Sarbah alumni to tearfully visit the void, and solemnly brainstorm on how the hall’s spirit could be reignited in the shortest possible time. Somehow such low moments in history create opportunities for greater things to emerge from the ashes.

And I can assure one and all that the Hall is currently at the dawn of a major spiritual rebirth, never experienced in the University’s history.

Those familiar with Sarbah alumni routines must be used to the role of mpusuo in hall affairs. This is often the moment where Vikings, men and women together convene and merrily sip spicy and condensed goat soup, while discussing matters of grave concern. This is a Hall that relishes mpusuo in times of joy and in times of sorrow, but by all means in moments of recreation.

Thanks to the matter that convened us, attendance was at a record high at the meeting itself and even bigger at Item 13, in the Loggia. The location of the two events back to back was strategic, and enabled the distinctive goat aroma, gently billowing, to percolate the walls and pervade the meeting next door partly disrupting proceedings.

The invitation signs were clear, and soon there was a motion for the adjournment of proceedings which was instantly granted by me and the alumni president, His Eminence Albert Nyonyo.

The following is a summary of attendance that day: Vikings across the decades of which the oldest was the 1970s group, represented by ‘Rev’ Owusu Ansah the Hall’s certified encyclopedia; the 80s and 90s were probably winners in the numbers game; the 2000s juveniles nearly caught up, and the baby boomers of 2021 were in tow.

One gentleman we sorely missed was the mposuo king and founder, Nana Twum, a Viking from the Aburi mountains, who over a period of 15 years volunteered to write off all expenses on mpusuo, and with a cloth around his torso, and ladle in hand, cooked the most sumptuous barima nkwan ever in the history of university education.

Even our rivals the Vandals envied his mposuo recipe, which has since been patented.

And guess who did the taste test, and declared the soup fit for purpose before consumption began. Yours truly, the Kwatriot, with the support of the Alumni President his Eminence Albert Nyonyo, the Hall Master, Roger; the Dean of Students Rosina Kyeremateng, and Josephine, former Vice Master, and the Senior Tutor, Dr Darko. Not until our taste test, our constitution would not allow any false starts.

And whom did I meet? First the youngest generation of Okpo mates and ‘lords’, whom I went round greeting and fist-bumping. These include Chief Agyeman, Chief Cyrus, Chief Charles, Chief Bantama, Chief Eben, Chief Okesie, Ambassador Howard, Agoba, etc and the like.

The hall appears to have a number of lords and chiefs, whom we advised to be of good behavior, and at all times prioritise academic work over of extra-curricular activities. A few Vikings otherwise regular at meetings were missing that day: Tom Sawyer, and Auntie Bettie Mould-Iddrisu.

Tom was quietly with us in spirit, and was angrily whipping his fingers from faraway New Jersey; Bonnah Koomson was licking his lips in sympathy from Texas; Patrice Caesar Sowah tasted the mpusuo by zoom, and so did Auntie Betty. But of course Ex Okpo commander, Lawyer Opoku Agyeman couldn’t have missed this, and quickly switched from the lawyer mode to commandeer the meeting; and ever present  was Lawyer Yaw Nketia, who gave freely from his vast experience, and knew almost everybody by name.

Grace Frimpong of course graced the occasion; and Rosina rose to her feet and gave a fitting benediction at the meeting. His Eminence was clearly the most eminent of all.

But there were other surprises at the mpusuo session. One lady confessed being a thorn in my flesh while I was her lecturer in the 90s; then were Yvonne and Josephine, two ‘daughters’ of mine.  Yvonne gave me gifts from her garden. Rosina and Josephine even though with noses dripping complained the mpusuo was not sufficiently spiced.

Kwame Appenteng another former student surprised me. Alhaji Sidik of Radio Univers was there but had to rush back to the studios; Yeboah a former student emerged and pulled a surprise too. Ohui waved me from a distance.

Prof AQQ Aboagye of the Business School was not clearly a Viking, and probably came to the Loggia as a spy. I arrested him and posed with him for a picture to be used against him. Many of my former students happily had CEO or professor as title, including one little girl of the 1980s now a professor at ISSER.

Osei Agyeman surprised me with a grey beard; and one gentleman Juventus knew me while I was a young anonymous writer in the 1970s with the Catholic Standard. We stood, reminisced and exchanged phone numbers, even while salivating.

At the end of it all, colleagues, on the orders of Commander Maxwell Opoku Agyeman, officially handed to me the ultimate trophy, indeed the most precious part of the goat, which will remain unspecified— for security reasons.

Oh what a Nkrumah Memorial Day!