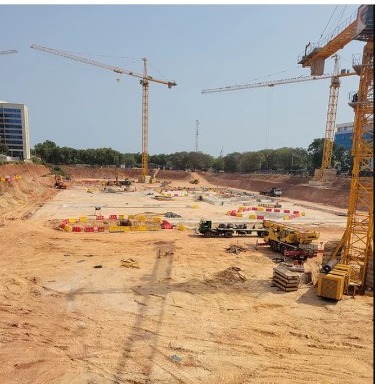 The Executive Director of the National Cathedral of Ghana has confirmed that construction of the religious edifice has stalled.

In a statement issued on Friday, he however, assured that construction would soon restart.

JoyNews checks at the project site on Monday, June 13 showed that work on the project has reportedly stalled for the past three months.

JoyNews sources disclosed that there is currently no work ongoing at the site but work is still at the foundation level.

In the statement, Dr. Paul Opoku-Mensah outlined measures and strategies the government has adopted to raise funds for the project.

The mass mobilisation seeks to mobilise a million Ghanaians to give 100 cedis each month towards the project. A shortcode, *979# has been developed for this purpose.

There is also the mobilisation of christian businessmen and women to financially support the project while government is also expecting financial support from Ghanaian Diaspora churches and other international actors who support the vision of the project.

Meanwhile, Dr. Paul Opoku-Mensah has refuted reports that Dr. Mensa Otabil, one of the Members of its Board of Trustees resigned from the Board due to illegalities.

In a statement on Friday, he explained that prior to the registration of the members of the Board of Trustees in 2019, Dr. Otabil opted out since, “he could not give the needed attention to the project.”

“So, Dr. Mensa Otabil did not resign from the Board as being alleged, but excused himself at the point of registration of the Directors in July, 2019. For the avoidance of all doubt, Dr. Otabil has not been a member of the Board of Trustees since July, 2019,” part of the statement reads.

Dr. Paul Opoku-Mensah, however, noted that Dr. Mensa Otabil, “nonetheless remains actively interested in the project and continues to share his views on strategy with the Secretariat.”

Ranking Member on the Foreign Affairs Committee in Parliament, Samuel Okudzeto Ablakwa had alleged that Dr. Mensa Otabil had resigned from the Board of Trustees.

Speaking on JoyNews’ The Probe, Mr. Ablakwa asserted that the resignation was due to the illegality being perpetrated by the Akufo-Addo government with respect to the project.

“There is quite an uneasy calm among the Board of Trustees. And I can confirm to you that one imminent priest has walked away from the Board; the revered Dr Mensa Otabil is no longer with them.
“The whole year, he has not attended any of their meetings. It is not clear what his intention was, but he has given indication that all is not well,” he told host Emefa Apawu on Sunday, June 12.

DISCLAIMER: The Views, Comments, Opinions, Contributions and Statements made by Readers and Contributors on this platform do not necessarily represent the views or policy of Multimedia Group Limited.
Tags:
Dr. Paul Opoku-Mensah
National Cathedral of Ghana