Letter from Africa: The dilemma of how to appease Mugabe’s spirit 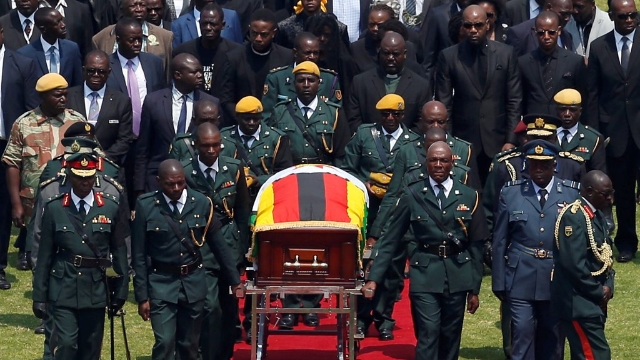 In our series of letters from African writers, journalist-turned-barrister Brian Hungwe writes that many Zimbabweans have been shocked to learn that ex-President Robert Mugabe’s widow had been staying with his body at home ahead of his burial at his rural home later on Saturday.

How do you eat, sleep and drink with a corpse in your house for weeks?

That question has been puzzling many Zimbabweans since it emerged that the body of former President Robert Mugabe – who died more than three weeks ago (on 6 September) at the age of 95 – is being kept inside his opulent Blue Roof mansion in the capital, Harare, amidst friction between the government and his family over whether he should be buried in a shrine at Heroes Acre or in his home region of Zvimba north-west of the capital, Harare. 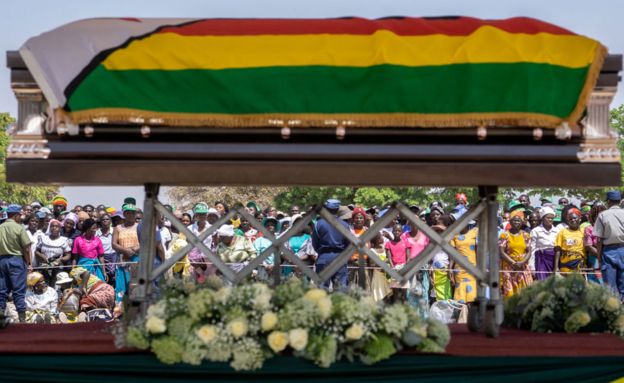 Mugabe’s coffin was put on display in his home region

With no official announcement of where his body was, some Zimbabweans thought it was being kept in a mortuary while others went as far as to speculate that Mugabe – as the heir to the chieftainship of Zvimba, his rural home – had already been buried in a cave in accordance with the rituals of his Gushungo clan, following his state funeral in Harare and the mourning and body-viewing in Zvimba.

But photos of Mugabe’s casket at his mansion emerged on Monday (23 September) when South Africa’s firebrand opposition politician Julius Malema came to pay his respects to Grace Mugabe, the former first lady whose ambitions to succeed him as president were thwarted when her husband was forced out of office in 2017 by the military.

This was followed by the viewing of the body, and a sumptuous lunch of pie and vegetables across the room from the corpse.

Some Zimbabweans are now drawing comparisons with rituals in Indonesia’s Tana Toraja region, where it takes a long time to bury the dead.

The corpse is kept in the house. The bereaved wash and clean it. They bring it food twice a day, as well as coffee and even cigarettes.

It is a way for the living to deal with grief. People believe the dead can hear them, and if they do not take care of the dead, the spirit – hovering above their heads – will haunt them.

Fear of the dead

Traditional beliefs among the Shona ethnic group – under which the Gushungo clan falls – also requires many rituals to be performed when death occurs.

These rituals reinforce a collective identity and help families and communities to come to terms with the loss of a loved one. 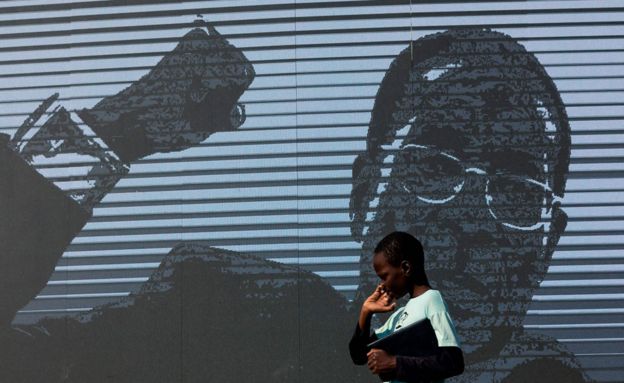 Zimbabwean experts in this field also say that Shona funeral rituals tend to revolve around fear of the dead.

The spirit is regarded as being powerful, with human-like emotions. It can also haunt the living, if the corpse is not looked after.

Having ruled Zimbabwe since independence in 1980, Mugabe was not just a towering figure – he was a political institution.

Next to his mother

Some Zimbabweans say the 95-year-old spirit may not yet be ready for his interment and this why his body was kept at his mansion for so long.

His family appears to be at ease with this. Some of them have said one of Mugabe’s wishes was that his wife should never leave the corpse until he is buried.

It is unclear why he would make such a wish. Perhaps the family fears his body could be tampered with for ritual purposes.

According to the family, Mugabe had another wish – to be buried at his rural home, close to his late mother, Bona. They further accuse President Emmerson Mnangagwa, Mugabe’s long-time ally, of betraying his former comrade and being behind the military takeover.

Normally the wishes of the dead are respected, but when alive, Mugabe defied the wishes of some of his liberation war colleagues who asked not to be buried at Harare’s Heroes Acre, the shrine for freedom fighters.

It seemed as though Mr Mnangagwa was going to do the same – he announced that a special grave would be built for his predecessor at Heroes Acre.