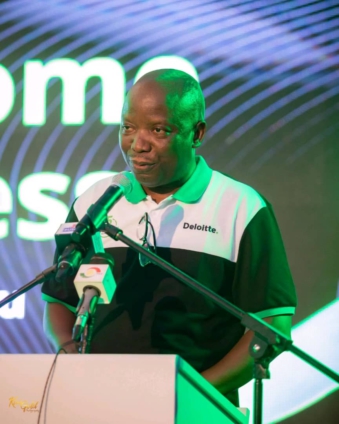 Auditing firm, Deloitte Ghana, has urged the government to leverage its recent digitalisation drive and registration of citizens by the National Identification Authority (NIA) to expand its tax base and generate more revenue.

Government missed its revenue target of ¢43.4 billion for the first half of the year by ¢5.6 billion.

The revenue deficit was largely due to shortfalls in non-oil tax revenue which fell short by ¢4 billion representing 12.7% of target for the period and the delay in implementing some revenue measures, particularly the e-levy.

This compelled the government to revise its revenue projection for this year.

The revised budget projections for 2022 is expected to be funded by tax revenue, which is set to contribute 76.85%.

Non-tax revenue is expected to contribute 16.48%, whilst other revenue, grants and social contributions are expected to account for a total of 6.67% of the revenue.

The projections for the E-levy has also been revised from ¢6.9 billion to ¢611 million, following the low performance of the tax handle in the first and second quarters of 2022. The government also revised projections for VAT from ¢14.5 billion to ¢15.4 billion, a 6% increase in projections.

In a continued effort to mitigate the impact of COVID-19 pandemic on economic activities in the country, the government is extending the window for the recently ended tax amnesty programme to December 31, 2022.

To benefit from the amnesty programme, taxpayers in default are required to apply and settle tax arrears by December 31, 2022.

Deloitte said this extension provides an opportunity for businesses and individuals who could not meet the initial submission deadline to make applications to regularise their tax status with the Ghana Revenue Authority (GRA) by December 31, 2022.

The qualifying years for waiver of interest and penalties however remains the same (i.e prior years up to December 2020).