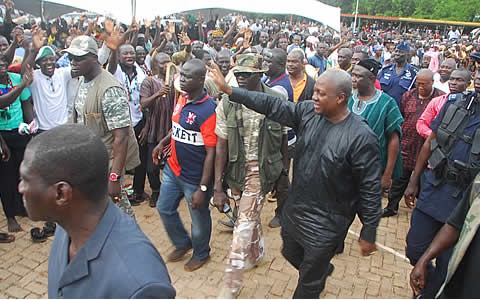 President John Mahama begins a three-day working visit to the Western Region, Friday.
The visit forms part of the President's objective to spend more time in the regions and interact with fellow Ghanaians in all parts of the country.
According to the presidency, Mr. Mahama will also use the opportunity to interact with the chiefs, leaders and public officials in the various communities he is scheduled to visit during the tour.
This weekend's visit to the Western Region will start from the Bia East District and move through Enchi, where the President will inspect work on the Asankragwa-Enchi Road, and then to Tarkwa and Sekondi-Takoradi.
The President is scheduled to address a gathering of students at the University of Mines and Technology in Tarkwa this evening.

At Takoradi, President Mahama will be briefed on progress being made on the expansion project at the port. He will also inspect work on the sea defence project at Sekondi.

He will end the Western Region tour after attending a thanksgiving church service on Sunday at Effiakuma in the Sekondi Takoradi Metropolitan Area.