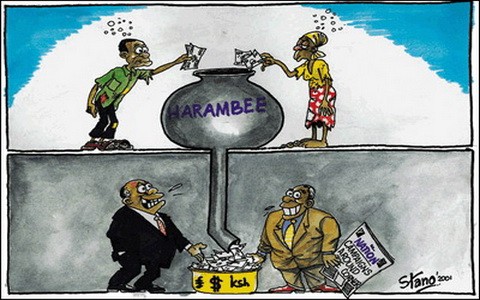 Corruption in Africa is seen as the abuse of entrusted power for personal gains, or in other words, use of public position or status by an office bearer for his own benefit.

Corruption in Africa is largely brought about by the selfish character of the society where informal relations, family connections and social reciprocity are shown in ways of favouritism, cronyism and nepotism.

Most social and economic structures in Africa exhibit a complex interplay between the traditional and the modern way of doing things. The traditional social order is organised according to principles of kinship, community and reciprocity.This creates strong patron client relationships bound by a traditional sense of deference to leadership and an expectation that loyalty towards patrons will be rewarded through subsequent personal favours.

In this system, “the formal legal structures and institutions that prescribe the normative rules for gaining and exercising power may be publicly honoured but privately circumvented through informal institutions and arrangements that shape political behaviour and expectations, even though they may be publicly unacknowledged or even condemned”.

Cultural factors also play an important role in shaping our social and economic structures.  The culture of gift-giving and gift-taking, used in our culture to cement social and economic relationships, is perceived to create conditions for corruption in Africa.The patronage system also fundamentally influences the formal system and creates contradictions between how institutions are intended to operate in principle and how informal practices supplant formal structures in reality. As a result, public administration and political competition often appear to be driven more by personal ties than formal rules.

Voting patterns are still somewhat influenced by traditional forms of identity such as family, clan, ethnic group or ethnic membership and policy-making is often dominated by the dispensing of favours rather than the promotion of the broader public good. The net result of this situation is the creation of an environment characterised by limited or inadequate commitment to change the status quo or to tackle the underlyingcauses of corruption in Africa.

The effects of bribery and kickbacks in the education, water and healthcare sectors represent the implicit costs of corruption in Africa. These incidents transform corruption into a “regressive tax” on services that the poor cannot afford, making basic services unattainable. Thus, it is the poor and vulnerable who suffer most due to corruption as they are more reliant on Government services and public systems to satisfy their most basic needs.

In addition to the bribes that are demanded of those who cannot afford them, corruption results in the deviation of funds intended for development and undermine Government’s ability to provide basic services. It also undermines the rule of law, feeding inequality and injustice, discouraging foreign investment, further impeding development in Africa.

A lack of transparency, integrity and accountability is related to economic under-performance and fetters progress toward poverty eradication in Africa. As the world’s most under-developed region, the barriers to development and poverty eradication that corruption imposes are costs Africa can ill afford.

Corruption on a large scale associated with some dictators and their cronies can involve embezzlement of huge sums of public funds, and the mismanagement, wastage, inequity, and social decay that come along with it, can be disastrous for an African economy.

In Africa, bribes may have to be given before any investment takes place and upon entering into negotiations for the establishment of an enterprise, one need to pay substantial bribes at various stages to get a simple business established.In addition to the implicit costs of corruption due to bribery, there are also hidden costs associated with corruption. The costs of a form of corruption termed “quiet corruption” by the World Bank, adversely affect the poor in particular.

One example of this type of low-level corruption in Africa comes from Burkina Faso, ranked 98th in 2010’s in the world with a score of 3.8. The Burkina Faso anti-corruption network identified a primary school inspector who used to arrange for teachers posted to rural areas to be transferred back to cities if they paid her small sums of money, thus depriving the rural poor of much needed teachers.

Low-level corruption in the education sector is of course not unique to Burkina Faso. In many African countries, teachers at Government schools stay away from class or do not take up appointments in remote regions. The results of this behaviour has devastating long-term effects, as children who are denied a proper education because of absentee teachers will suffer low cognitive skills and associated problems in adulthood.

It is clear then that corruption in all its forms is a crime against development that blocks attempts at growth and poverty eradication. Corruption impacts most heavily on the poor and vulnerable members in society, but underdevelopment affects the future growth and prosperity of all people. Thus, fighting on behalf of the disempowered and ensuring Africa’s development means that the responsibility for dealing with corruption falls squarely on all, from Governments and donors to civil society and citizens in Africa.

Corruption is endemic in most African societies but is worst in countries where:institutions such as the legislature and judiciary are weak;the rule of law is not strictly enforced;political patronage is the norm;the independence and professionalism of the public and private sectors have been eroded; andcivil society lacks the means to hold perpetrators to account. These features may characterise many African nations, but the problem of corruption can nevertheless be addressed through the combined efforts of individuals in all spheres of society.

In order to make corruption unattractive in Africa, and eradicate the negative effects of corruption on development, there is the need for various Governments, donors and non-Governmental organisations to adopt anti-corruption measures in all their development strategies in Africa. In particular, the first step in solving the problem is for various Governments in Africa to reaffirm their commitment in implementing the United Nations Convention against Corruption (UNCAC).

I also urge donors to be transparent to allow for greater public oversight of where and how their money is spent. This will help citizens to hold Governments receiving donor funds to account. I further suggest that transparency can be improved by the regular publication of information on how governance and anti-corruption efforts are being implemented to achieve progress on the Millennium Development Goals. Transparency initiatives could also include national-level access to information laws, information campaigns on citizens' rights, and joining international initiatives to publish information on particular sectors, such as natural resource revenues.

Businesses must actively seek to eliminate corruption within their ranks, by keeping bribery out of the tendering and procurement processes and eliminating extortion, in accordance with the 10th principle of the UN Global Compact of universally accepted principles regarding human rights, labour, environment and anti-corruption.

Public opinion must support anti-corruption strategies to be a major force in creating an environment in which corruption is not accepted or condoned. Too often in the past, corruption has been seen as a fact of life with corruption cases rarely being reported. Mechanisms must be put in place for citizens to hold authorities to account on matters of corruption. Furthermore, knowledge will empower communities to become part of the solution to the problem rather than the victims of corruption.

In effect, accountability on development progress can also be promoted through measures to increase the involvement of community members, including women and other vulnerable groups, in decision-making processes and monitoring Government pledges and aid projects. I suggests that tools like shadow reports and scorecards can be used to rate Governments against their commitments to the fight against corruption in Africa.

Worldwide corruption is a serious problem that weakens societies, ruins lives, and impedes development. As one of the world’s most corrupt regions, it is vital that Africa tackles the problem with increased vigour. Effectively addressing corruption on the continent must become a development imperative as African countries cannot bear the costs of corruption.As ever, it is the poor and marginalised who suffer most from corruption, but as a threat to the development of the region, fighting corruption becomes the shared responsibility of every African.

In addition to anti-corruption measures being made an integral part all development strategies at the State level, the private sector and civil society must assist Government in fighting the scourge. Only then will Africa be able to achieve the development, growth and prosperity required for the continent to reach its full potential and to make corruption unattractive to the future leaders of tomorrow.