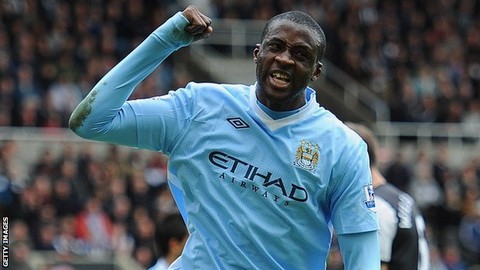 Yaya Toure netted a hat-trick to keep Manchester City on course in their Premier League title push with a 5-0 win over basement boys Fulham.

Fulham centre-back Fernando Amorebieta endured a game to forget at the Etihad Stadium as he gave away a penalty in each half – both converted by Toure.

The latter, a woeful challenge on City playmaker David Silva, resulted in a red card – the first in English football for a player dismissed a remarkable 11 times during his time at former club Athletic Bilbao.

Toure saved his best until last, arching home an exquisite 30-yard strike that had echoes of his effort in City's League Cup triumph over Sunderland at the start of the month to bring up 20 goals for the season.

His midfield partner Fernadinho got in on the act with five minutes to play and Martin Demichelis enjoyed a tap-in to complete the scoring.

The result lifts Manuel Pellegrini's team to third in the table, six points behind Chelsea ahead of the first of their three games in hand on the leaders at Manchester United on Tuesday, while Fulham remain rooted to the bottom.

England midfielder James Milner saw David Stockdale beat his half-volley to safety in the 17th minute but it was a largely disjointed start by the title challengers.

There ended an enterprising period for the visitors, and they fell behind three minutes later as City found favour with their third penalty shout of the game.

Steve Sidwell escaped censure twice during the first quarter of an hour, but the assistant referee flagged for a spot kick when Amorebieta clumsily caught Alvaro Negredo in the back under a high ball. Toure converted nonchalantly, sending Stockdale the wrong way.

Sascha Reither, a surprise selection in holding midfield for Fulham, might have restored parity but headed over under pressure from Aleksandar Kolarov.

Amorebieta went some way to atoning for his error by heading Silva's delicate 37th-minute chip off the line but the centre-back should have levelled when left unmarked from a Richardson corner, before Kolarov concluded the half by rifling a trademark drive against the crossbar.

If Amorebieta suffered from an element of misfortune on City’s first penalty, there was no excuse for his poor decision eight minutes into the second period.

Once more, Silva left the Fulham defence in his wake and a reckless lunge from Amorebieta left refreee Jon Moss with little option other than to point to the spot and issue a straight red card to a player already booked for his previous infringement.

Toure again made no mistake, and Fulham boss Felix Magath's decision to send on 17-year-old Patrick Roberts for a debut suggested he knew the game was up.

Speculative efforts from Milner and Kolarov flew off target before Toure showed them how to do it with his sensational third.

City threatened a rout and it duly arrived – Fernandinho gliding past William Kvist to beat Stockdale at his near post before Demichelis netted his first goal for the club late on.