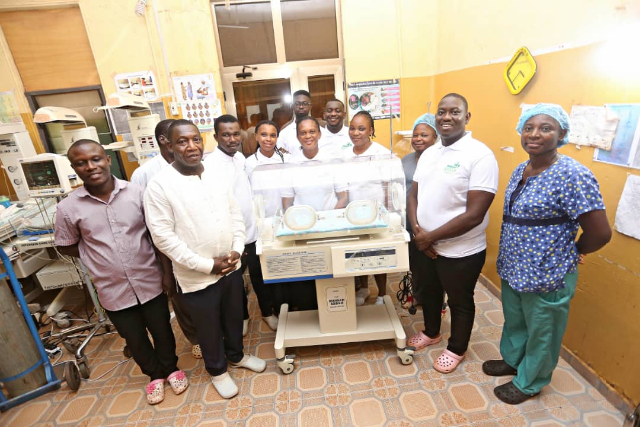 As many as ten new-borns die every year and over a hundred cases referred due to lack of an incubator at the neonatal department of the Tamale Central Hospital.

Out of an average of 5,000 babies delivered each year at the facility, one-third of them are premature children and need an incubator to survive.

But the unavailability in sufficient numbers of this basic equipment has led to soaring infant mortality, with at least ten neonates dying annually in the last decade.

Medical superintendent of the hospital, Dr. Mahamadu Mbiniwaya, revealed this to JoyNews on Thursday, August 1, after a charity organization donated an Incubator to the facility.

Dr. Mahamadu outlined some of the desperate measures neonatal staff have had to adopt to reduce infant mortality in the absence of enough incubators, including instances where more than two premature babies are tucked up in an Incubator.

“Premature babies are those who come before their time. Some come after 28 weeks of gestation due to a mother developing high blood pressure and sometimes what we called pre-eclampsia,” he said.

The Medical Superintendent said the facility had only one Incubator donated by the Japanese. He said the new donation would help reduce infant mortality and morbidity.

“This one will reduce infant mortality and also reduce our referral rate; save a lot of lives, it will save cost, it will also save the community, especially those people coming from the villages who cannot afford, and it has boosted the morale of the staff”, he stated, after receiving the Incubator from Staff of the Mansah Abbam Foundation.

Madam Mansah Akua Abbam became a household name in the Northern Region renowned for her dedication to addressing the spiritual, economic, social and physical needs of children.

As a distressed single parent, she grew to become a well-known influential figure for her sterling achievements in addressing problems of children in many societies, especially in Tamale.

When she died, her children, partners, and friends came together to form this charity foundation in an attempt to keep up her name and works.

A Trustee of the Foundation, Frank Ameyaw Abebresse, who presented the Incubator to the hospital said, Mansah Abbam was an exceptional woman who loved children and passionate about social problems.

“So basically, Mansah Abbam was all about children and helping them grow to become better people. So the goal is, as she is no longer with us, what can we do to honour her, so the goal is to do things that make Mansah Abbam stay alive and giving Incubator to the hospital is one of the ways of keeping her alive, because she loved kids,” Mr Abebresse explained.