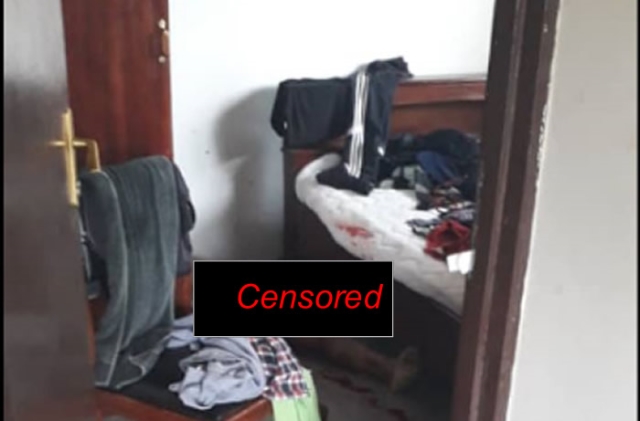 A police officer with the Marine Unit, who was on duty at the Osagyefo Power Barge in the Western Region has reportedly committed suicide, by shooting himself with an AK 47 rifle.

He is said to have shot himself with the rifle, which had officially been assigned to him for work purposes in protecting the power barge.

His name is yet to be put out but Graphic Online has gathered he was a Sergeant.

The incident happened Sunday, March 24 morning at the police bungalow at Effasu-Mangyea in the Jomoro District, where officers on duty at the power barge lodge.

The police are yet to unravel the circumstances surrounding the death but a suspected suicide note found at the scene had wife written on it with a phone number beside it, as well as two other names and phone numbers on it.

A photo of the note, which has been seen by Graphic Online read in part, “I can’t take this disgrace, something I don’t know about”.

When Graphic Online’s Western Regional Correspondent, Kobla Dotsey Aklorbortu contacted the police, it was explained the family of the deceased was yet to be contacted and so the police cannot give out any information as of now.

It was however explained that four police officers all from the Marine Unit were on duty at the power barge.

The deceased and another constable after their duty this morning retired to their room to rest whilst the other two went on patrol duties at the barge.

The deceased is said to have sent the constable to go get him something from town and the constable reportedly returned to find his lifeless body lying in a pool of blood with the AK 47 rifle lying next to him in the room.

Meanwhile, The Chronicle newspaper last week reported that the Western Regional Police Command has arrested and also interdicted four police officers for allegedly stealing electrical gadgets from the Osagyefo Barge, which they have been mandated to protect.

Also arrested are five civilians who reportedly aided the policemen to steal the gadgets, according to the newspaper's report.

The Jomoro District Police Commander, DSP McCarthy Zenge, confirmed the arrest of the policemen in a telephone interview with The Chronicle newspaper.

The Police Commander gave some of the names as Lance Corporal Zator and Ibrahim Muhammed, but could, however, not readily give the names of the remaining two officers.

According to DSP McCarthy Zenge, the unnamed officers were arrested as accomplices in the course of investigations into the theft.

The District Police Commander mentioned some of the stolen items as air conditioners, pylon cables, and refrigerators among others.

According to The Chronicle newspaper report, some of the local people discovered that the policemen were stealing gadgets from the barge and, therefore, reported their conduct to the District Chief Executive (DCE), Ernest Kwofie.

They later got some men to lay an ambush and reportedly caught the police officers removing the gadgets and packing them into a waiting vehicle. They were instantly arrested and handed over to the District Police Commander.

To protect the equipment in the barge from being pilfered by social miscreants, the Jomoro District Assembly struck a deal with the District Police Command to provide 24-hour protection for the barge. They were rewarded with a token of between GH¢600 and GH¢800 monthly by the assembly.

Unfortunately, the very people protecting such a vital state asset are the same people stealing the equipment.

It is equipped with a pair of single-cycle heavy-duty gas turbine units built by Ansaldo that have a combined generating capacity of 125 MW.

Unfortunately, since its arrival, it has not been able to generate a single megawatt of power and is reportedly deteriorating.