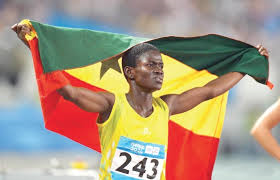 Olympic gold medalist,  Martha Bissah, last Saturday thrilled fans at the El-Wak Stadium in Accra as she won the 1,500m race at the Interplast-Sea&Shore National Circuit Championship in a time of 4m 37s.

The championship, which formed part of the Ghana Athletics Association’s programme for athletes ahead of the upcoming All Africa Games (AAG) in Brazzaville, saw Martha beating Beatrice Konama (4m 44s) and Hawa Combat (4m 34s).

In the men’s 200m final, Shepherd Agbeko clocked 21.30 seconds to defeat Bright Tsitey (21.75 sec) and Stephen Opoku (21.77), while Prosper Goku maintained his record as the local best in the 3,000m division, triumphing again after his earlier heroics at similar competitions in Sunyani and at Akatsi.

Safia Bright failed to maintain her winning streak in the women’s 100m final at Akatsi, losing this time to Dorcas Gyimah in a very close race.

In other events, Robertson Tay won the men's discus and Mary Zuta emerged winner in the women division, while Diana Tetteh triumphed in the 100m hurdles.

In a post-event interview with the Graphic Sports, national athletics chief, Prof. Francis Dodoo, charged the athletes to use the competition to make a mark for themselves.