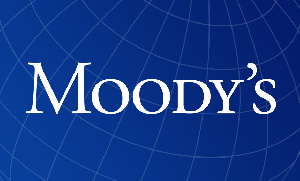 This is the second time in two years that Moody’s has downgraded the indigenous bank.

However, these ratings and assessments have been placed on review for downgrade.

The rating follows Moody’s action on December 2, 2022, to downgrade Ghana’s long-term issuer and senior unsecured debt ratings from Ca to Caa2 and place them on review for downgrade on November 29, 2022.

The downgrade in the sovereign ratings reflects the recent macroeconomic deterioration, further heightening the government’s liquidity and debt sustainability difficulties, and increasing the risk of default.

A statement on Moody’s website said the rating action captures the deteriorating macroeconomic environment and the increasingly uncertain operating environment for banks in Ghana, as reflected by the downgrade of the sovereign ratings and the lowering of the Macro Profile score to “Very Weak-” from “Very Weak”.

It further said that a restructuring of sovereign debt securities would also weaken the banking system’s liquidity, especially if maturities are extended, because it would mean that banks will need to hold on to their government exposure for an extended period, limiting their ability to lend to the real economy.

It indicated that Ghana’s macroeconomic environment has deteriorated, with the inflation rate rising continuously since the beginning of the year despite monetary tightening.

Inflation climbed to 40% in October 2022 from 13% at year-end 2021 which, in addition to the rapid currency depreciation, has increased government borrowing costs.