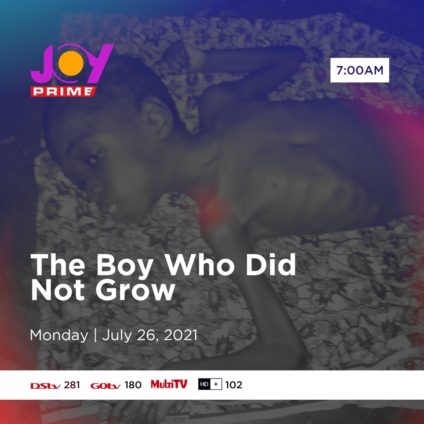 Mother of 18-year old, described as the boy who did not grow says but for the unfortunate sickness, her son would have been in the Senior High School by now.

Doris Amewowoe recalled a child who was also born around the time she gave birth to Gideon Kwame Fafa Amenya is currently in Senior High School.

“There is a woman who also gave birth around the same time, I had given birth to Gideon so I could tell because now her child is in SS 2, so any time I remember, I say to myself, my son would have been in SS or JHS,” she said.

Gideon has never seen the four walls of a classroom, kicked a ball, never made friends, nor nursed a teenage crush.

“Anytime I look at him, and look at his age mates, I get worried, but I have no one to share my predicaments with,” Doris said.

His mother tells Joy Prime’s Daniel Dadzie the boy was brought forth just like any other healthy baby until his third month.

“But after his naming, I was not seeing any sign in his growth so I informed my sister who advised we take him to the hospital.”

According to her, Gideon was diagnosed with a spinal cord issue so they were rescheduled for another date but they could not report to the hospital due to financial constraints.

“There was no money so we could not take him [to the hospital] up till date,” she told Daniel Dadzie.

The boy’s condition has affected his natural growth processes causing his 42-year-old mother who has been his full-time caregiver a grieve burden.

Gideon is the second child of seven and one she loves dearly.

“It is my desire to see my son better and my other children living their dreams. But, until then, I will continue to do my best,” Doris said.