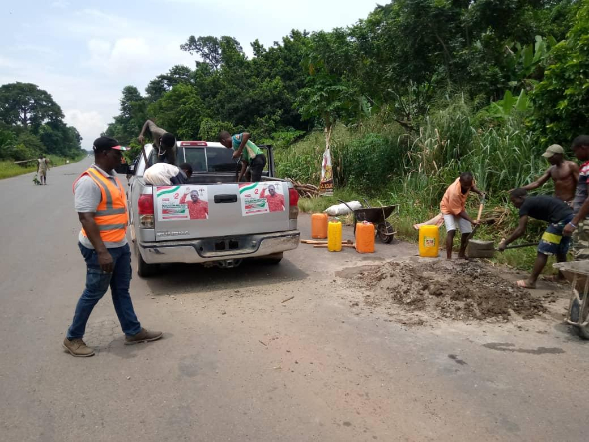 Member of Parliament (MP) for South Dayi Constituency in the Volta Region, Mr Rockson Defeamekpor, participated in the patching of potholes on the Asikuma to Peki-Adzorkoe stretch of the Eastern Corridor road.

With the support of constituency executives of the National Democratic Congress (NDC), the MP helped in filling gaping potholes with concrete on some 18-kilometre stretch of the highway.

Mr Defeamekpor told the Ghana News Agency (GNA) the initiative was to help prevent road crashes, mainly from drivers having to maneuver dangerously around potholes at breakneck speed.

He said there was the need to protect the asphalted portion of the road from further destruction, and that the initiative was a self-help effort at addressing bad roads.

“This is what I can do for my constituency, and we are doing it all the way to Peki- Adzorkoe, where the asphalt ends”.

The MP said he was actively lobbying stakeholders on the completion of the Eastern Corridor road, and would expect that priority was given to the road.

He accused the government of abandoning the road project and stated that the NDC would get it completed within three months of winning back power.

Mr Defeamekpor declared support for the “Fix Volta Roads” social media campaign, and also the proposed construction of an accident and trauma centre for the Peki Government Hospital.

The MP said he was also working on getting a grader to shape feeder roads in the constituency.

Mr Defeamekpor further lamented on water challenges within the constituency, saying half of his constituents lacked safe drinking water although they lived in close proximity to the Volta Lake.

He noted that increasing fish farming activities were gradually making raw water from the lake unsafe for consumption for the many communities who depended on it.