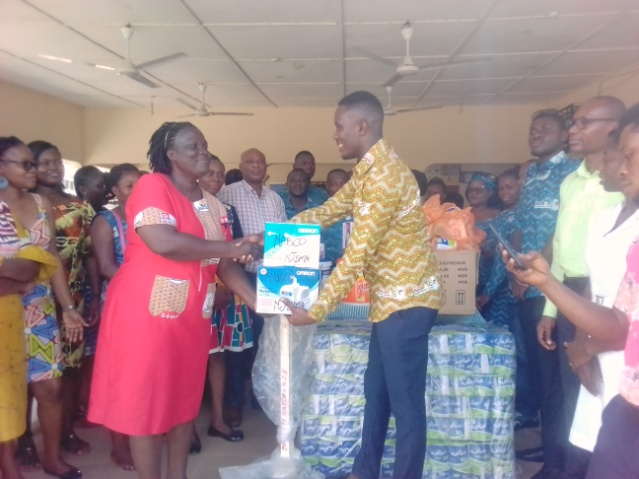 Personnel of the Nation Builders Corps (NABCO) in the New Juaben South Municipal Assembly (NJSMA) have presented items to the Koforidua Polyclinic, as part of activities to mark their one year anniversary.

Presenting the items, the NJSMA Coordinator of NABCO, Michael Adarkwa, said the donations was a way to give back to society for the support given them.

He said for the one-year that the organisation was created, it employed 1,642 graduates who were posted all across institutions within New Juaben South.

Mr Adarkwa said the personnel of NABCO were grateful and decided to practically demonstrate how they felt by contributing to buy the items for the Municipal Health Directorate to assist mothers and asthmatic patients.

Secretary of the NABCO, Gifty Sackey, anniversary committee in the NJSMA, indicated that other motives behind the gesture was to show appreciation to the government for making it possible for unemployed youth to start work and create public awareness that NABCO is real.

She said she was happy that the target of personnel, which was women in the labour ward and those at the Ante-Natal appreciated their packages.

Ms Sackey invited all the people in the NJSM to join the personnel of NABCO to mark the anniversary.

The Acting Director at the Polyclinic, Irene Anuwaa-Amarh, who received the items on behalf of the polyclinic thanked the personnel for their kind gesture and appealed to other philanthropists to bring in more donations to assist the clinic.