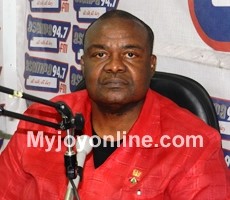 A member of the National Democratic Congress is calling on the government to seek a court order banning the airing of leaked controversial tapes on radio.

Kakra Essamuah, who is also a lawyer, says he has heard there are several other controversial tapes, akin to what has been described as the vikileaks, waiting to be played on air and the government must be proactive.

"They [the tapes] cannot be played because the state can take an order from the court against the publication or dissemination [of a tape] that was obtained without legal authority," he told Kojo Asare Baffour Acheampong, host of Asempa FM's political talk show programme, Ekosii Sen, Monday.

Describing the content of the leaked tape as a "gossipy bombast," the NDC man said the government should not allow any further airing of such tapes.

Mr. Essamuah dismissed accusations of cover up if the government were to take such an action.

The NDC man is convinced beyond every shadow of doubt that the leaked tape which has caused the deputy Minister of Communication her position, was procured criminally.

He said the driver, Lawrence Quayeson,  accused of recording the conversation of Ms Victoria Hamah in the famous vikileaks saga  must be prosecuted.

Quoting portions of the Electronic Communications Act, 2008, Kakra Essamuah maintained, the conduct of Quayeson was criminal, improper and must be brought to book.

"(e)A person who knowingly obstructs or interferes with the sending, transmission, delivery or reception of communication.

"(f) Intercept or procures another person to intercept  without the authorization of the provider or the user or a court order…commits an offence and is liable to conviction" he quoted  Act 775 Section 73 of the Electronic Communications Act as saying.

He expressed surprise about the posture of the police in dealing with the controversial matter.

The police after initially arresting Lawrence Quayeson, released him without a charge but Kakra Essamuah said the police erred and must take a second look at the law.

Meanwhile, a private legal practitioner, Samson Lardy Ayenini insists the driver has committed no criminal offence to be prosecuted.

He said the laws quoted copiously by Essamuah do not apply in this case. Mr. Ayenini said at best, Victoria Hamah can seek a civil suit against the driver.

To explain his arguement further, Samson Lardy Ayenini stated on his facebook wall:

"If the Electronic Communications Act criminalizes such acts as presently being discussed, then all presidents/agencies that backed (including financially) and are still backing Crusading Guide's A.A.A must get ready for prosecution. The difference is small/big – don't miss it. It does not criminalize the ordinary journalists’ method of recording a conversation. What it cr…iminalizes is; “unlawful access to communication transmitted over electronic communications network”. Underline, "communication transmitted", plus "over". Over what? Over an "electronic …network" not the journalist’s recording device. It’s rather an additional backing for article 18(2) by protecting your WIRED conversation from esp. the telcos or the state via its security agencies. Guess why the telcos are not to disclose your telephony records to third parties unless by a warrant or court order."