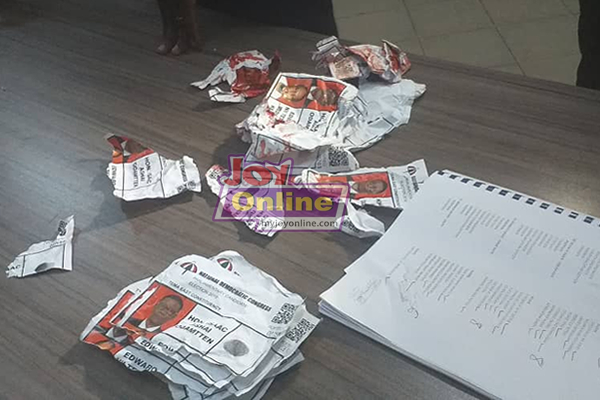 There was drama at the Tema East constituency during the NDC Primaries when an agent for one of the candidates tore some of the ballot papers.

The agent, whose name is unknown, according to JoyNews’ Matilda Wemegah forcibly, tore the ballot papers just when sorting had been completed and counting was about to begin.

“The agent pulled the ballot papers that were being counted and tore them into pieces,” Matilda Wemegah reported.

No one knows the reason for the agent’s action but the police, according to Matilda, have taken control of the situation.

“It became a bit chaotic at the moment counting has been suspended for the moment,” she added and said it’s unclear how many papers were torn.

She reported that anxious party members have gathered at the centre.

Some 524 aspirants gunning to become Parliamentary candidates of the NDC across 157 constituencies in the country.

NDC, Ghana’s largest opposition party, is voting Saturday to select those who will represent its constituencies in the 2020 election.