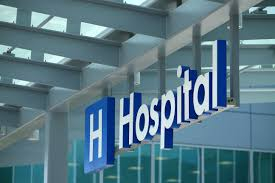 Following Joy News’ harrowing report of a woman whose baby was swept away in flood waters as she attempted to reach a hospital too far away from her home, the head of the Ghana Health Service (GHS) says efforts are being made to fast-track work abandoned health facilities in the region.

On the Super Morning Show Wednesday, he commended members of Parliament and the nation’s Ministers for donating a total of GH¢28 million for the construction and completion of work on ten hospitals throughout the country.

As it stands, one of the ten hospitals is functioning. The Ga North Municipal Hospital in the Greater Accra region is the first to finish completion earlier this month. Although not fully-operational, the GHS has gathered over a dozen staff members who operate the outpatient center from 8am to 4pm.

“It was not a fully-functioning hospital, and when we want to start a hospital, we start slowly and build it up,” explained Anthony Nsiah-Asare, the director-general of GHS. “We had to get doctors within the region and we got a few staff to go there and get the hospital running.”

Before the hospital opened, reports surfaced that it was “abandoned” by government officials who reportedly sold fake promises to community residents.

One community member, whose name has been withheld, recalled a time he discovered that looters stole several air conditioners from the hospital. At the time of the report earlier this year, he pleaded with authorities to immediately resume and complete construction of the hospital.

“They [authorities] would come and pay a ceremonial visit and would say that they would open it in three months but nothing came,” he told Joy FM’s Daniel Dadzie in Ofankor at the time of the report.

He continued: “The hospital could serve a big purpose for the people here. The nearest hospital is at 37 [Military Hospital], Achimota and Ridge. It’s too far.”

Since then, the hospital has opened – though not 100 percent complete – it serves its purpose to the full extent that it can, said Asare.

“No hospital in the world is fully functional on the first day,” Asare acknowledged. “It’s good news that this hospital is up and running, but hospitals are not just buildings. When you construct a hospital, you have to make sure that it comes with all the proper equipment and facilities.”

He further added that in 2019, the hospital will be completed and will operate 24 hours a day.

As for the other nine hospitals still under construction, “there is no deadline on when the hospitals will be built,” but he clarified that he is working with the directors of health in each region to get them functioning.