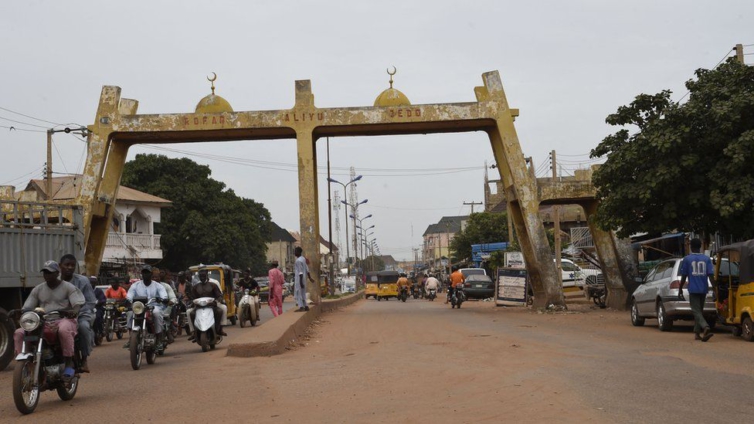 The city of Sokoto is now under curfew (file pic)

A 24-hour curfew has been declared in Sokoto, Nigeria, after protesters took to the streets demanding the release of two suspects in the murder of a Christian student last week.

Deborah Samuel was beaten and burned by Muslim students who accused her of posting “blasphemous” statements about Islam in a WhatsApp group on Thursday.

Her death has been widely condemned by Muslims and Christians across Nigeria.

On Saturday, demonstrators burned tyres and the police fired teargas.

Some of the protesters besieged the palace of the Muhammad Sa’ad Abubakar, the Sultan of Sokoto and the highest spiritual figure among Muslims in Nigeria.

The Sultan has condemned the killing at Shehu Shagari College of Education and demanded those involved face justice.https://buy.tinypass.com/checkout/template/cacheableShow?aid=tYOkq7qlAI&templateId=OTBYI8Q89QWC&templateVariantId=OTV0YFYSXVQWV&offerId=fakeOfferId&experienceId=EXAWX60BX4NU&iframeId=offer_0e763acc7b457c03340a-0&displayMode=inline&widget=template&url=https%3A%2F%2Fwww.bbc.com

Announcing the curfew, Sokoto Governor Aminu Waziri Tambuwal urged the protesters: “Please, in the interest of peace go back home.”

Nigeria is Africa’s most-populous country and most people in its mainly Muslim north and the largely Christian south are deeply religious.

Religious tensions and deadly clashes are not uncommon, particularly in the north where some states have adopted strict sharia laws, including death sentences for blasphemy.

Blasphemy in Islam includes the mocking or disparaging of attributes of the religion as well as denying any of its fundamental beliefs.

President Muhammadu Buhari has condemned Ms Samuel’s killing and said there should be an impartial investigation.

Nigeria’s largest grouping of Christian churches has demanded the authorities bring the culprits to justice.