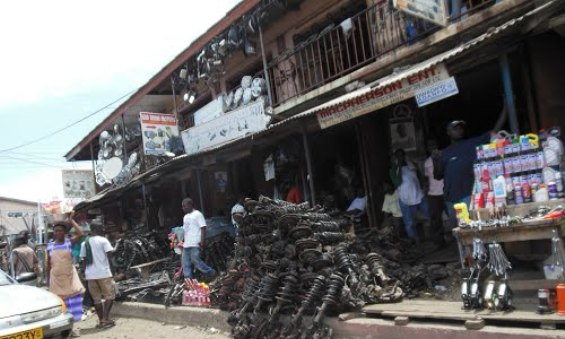 Nigerian traders at the Sunyani Magazine in the Brong Ahafo region say they are living in fear as tensions between them and their Ghanaian counterparts seem to be on the rise.

The regional branch of the Ghana National Association of Garages on Wednesday issued a 72-hour ultimatum for all Nigerians involved in retail businesses to close their shops or face the wrath.

Members of the Association say the trade is for Ghanaians only, therefore the Nigerians should close their shops and park out of the enclave, popularly known as ‘Magazine’.

The members said they were unhappy that the Nigerian businessmen and women had invaded the main Sunyani Magazine and the Central Business District of the Municipality, and were rather engaged in general retailing instead of wholesaling.

The expatriates are dealing in spare parts, mobile phones and general goods at affordable prices, a situation that members of the Association noted were collapsing their businesses and economic activities.

There have been similar tensions at the Suame Magazine in Kumasi where some Ghanaian retailers have vowed to evict the foreigners who they say are taking over their business.

Disputes have also been recorded at the Tip Toe lane, one of the biggest gadget retail centres near the Nkrumah Interchange in Accra.

The traders demand for the foreigners to operate according to law may not be entirely wrong as the GIPC law Section 27 (1) of the GIPC Act states that “a person who is not a citizen or an enterprise which is not wholly owned by a citizen shall not invest or participate in the sale of goods or provision of services in a market, petty trading or hawking or selling of goods in a stall at any place.”

As the deadline approaches, however, the Nigerians in Sunyani say they are surprised at their Ghanaian counterparts and are worried about what will happen to them.

“We are running for our lives because we don’t know what they have already arranged for us. If they had invited us, we are law-abiding strangers [and we would listen] but no one has come to tell us what their problem is,” leader of the Nigerian community Fidelis Ikechuku said.

He, however, said they will engage the police and the traditional council to resolve the issues amicably.