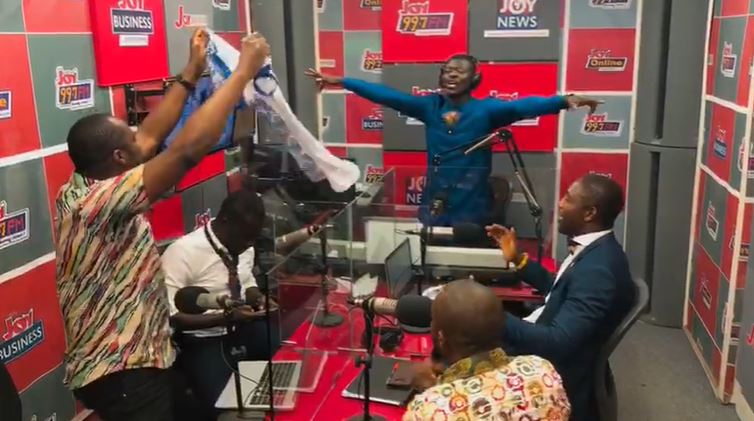 Thursday’s victory at the University of Ghana seems to be one for the ages.

The Presbyterian Boys’ Senior High School had fought a hard battle to secure the bragging rights as they came tops in the just-ended National Science & Maths (NSMQ).

They beat Adisadel College and Opoku Ware Senior High School, both of whom were gunning for the enviable trophy on October 8, 2020.

The euphoria that filled the University of Ghana Business School (UGBS) auditorium in the final embers of the competition trickled into the premises of The Multimedia Group as alumni of the newly-crowned champions would not let peace prevail.

JoyBusiness’ George Wiafe stormed into offices reminding his colleagues that he was celebrating six.

Deputy Health Minister Benard Okoe-Boye, an Odade3 himself who had showed up for a Personality Profile on Joy FM did not help matters. He represented his year group in the contest during his days in the schools.

He joined host of the Drive Time on Joy FM, Lexis Bill, another alumnus, to tout their latest achievement through hymns and appellations.

This was not without the vibrant company of JoySports duo George Addo Jnr, Gary Al-Smith with backing vocals from George Wiafe.

By the end of the competition, PRESEC had a total of 36 points and their close competitors Adisadel had 31 points. OWASS scored 21 points.

Meanwhile, President Akufo-Akufo has joined the stream of congratulatory messages coming in for the boys.

He tweeted; “Congratulations to PRESEC Legon for emerging victors in the #NSMQ2020. Winning #6 makes them the undisputed kings of the competition. Thoroughly well-deserved, and I look forward to welcoming them to Jubilee House soon.”

Congratulations to PRESEC Legon for emerging victors in the #NSMQ2020. Winning #6 makes them the undisputed kings of the competition. Thoroughly well-deserved, and I look forward to welcoming them to Jubilee House soon.👍🏽👍🏽👍🏽 pic.twitter.com/utgLB8XL4P

To the organisers of the event, the month-long intellectual event may be over but for the students of PRESEC Legon -past and present- the party has just begun.

How the Kings were recieved!

These boys have made history and will never be forgotten!!